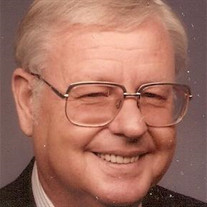 Glenn Ray Briggs, 85, Martha, passed away on Sunday, September 16, 2018 at the Jackson County Memorial Hospital. Memorial services have been scheduled for 2:00 PM Tuesday, September 25, 2018 at the First Presbyterian Church with Rev. Harvey Friedel officiating. Cremation and services were entrusted to the Kincannon Funeral Home and Cremation Service. Glenn Ray Briggs was born on October 6, 1932 to Harry H. and Elizabeth (Cooper) Briggs in Macomb, Oklahoma and then moved to Hobart, Oklahoma, not far from Altus. He graduated from Hobart High School in 1950. After high school, Glenn served his country in the United States Navy. While he was in the Navy he was stationed in the Philippines and Guam, where he helped construct airfields as part of the Seabees. After his military career, he returned to southwest Oklahoma and married Mary Francis Braun on October 22, 1955. He worked with the Corp of Engineers, helping with the reactivation of Altus Air Force Base during the Korean War. As he worked with the Corps, he came in contact with several engineers-in-training and decided that engineering was what he wanted to do. Glenn attended Oklahoma A & M, now known as Oklahoma State University, and earned his Bachelor of Science Degree in civil engineering. After graduation, he worked in Oklahoma City with an engineering firm. He eventually returned with his wife, Mary, to Altus and worked for a time with Bill Appleby. In 1964 he started his own engineering firm, Glenn Briggs and Associates, still in business to this day. Glenn and Jenifer J. (Brown) Connally were united in marriage on August 31, 1986 in Altus, Oklahoma. He made a change from the Catholic Church, to join his current wife, Jenifer, as a Presbyterian. Glenn was a member of the First Presbyterian Church, Oklahoma Society of Professional Engineers, National Society of Professional Engineers, Oklahoma Society of Land Surveyors, National Society of Land Surveyors and the Kiwanis Club. He enjoyed woodworking, doing handyman jobs, fishing, hunting and playing golf. Glenn is preceded in death by his parents; four sisters, Barbara Briggs Cole, Katherine Marie Briggs Baker, Helen Briggs Shultz and Faye Briggs Ryder; four brothers Roy Briggs, Troy Briggs, Vybert Briggs, Junior Briggs; and an infant brother. He leaves behind to cherish his memory his wife, Jenifer; two sons, Philip Ray Briggs, Gregory Scott Briggs and wife, Katie; two daughters, Glenna Ruth Long and husband, Gary, and Robin Ann Briggs; three stepsons, Mark Connally and wife, Tatyana, Todd Connally and wife , Kimberly, and Shaun Connally and wife, Phyllis; nine grandchildren, Kelsey Briggs, Jessica Briggs, Jacob Hildebrand, Liam Atkinson, Cooper Briggs, Candice Nickel and husband, Walter, Jennifer Boedefeld and husband, Stephen, Ian Connally and fiancée, Andrea Payne, and Raven Encino; a sister, Burna Briggs Cole and husband, Jim; many friends and lifelong associates. Memorial contributions may be made in his name to the First Presbyterian Church, 208 E. Cypress, Altus, OK 73521. Online tributes may be made at kincannonfuneralhome.com

The family of Glenn Ray Briggs created this Life Tributes page to make it easy to share your memories.

Send flowers to the Briggs family.