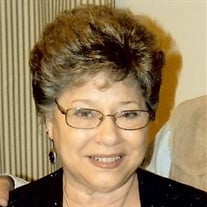 Helen Lois McLeod, 76, Altus, passed away Friday, December 6, 2019 at Integris Deaconess Hospital in Oklahoma City. Funeral services will be 10 a.m. Tuesday, December 10, 2019 at Kincannon Funeral Home with Rev. Dick Chapman officiating. Burial will follow services at the Altus City Cemetery under the direction of Kincannon Funeral Home and Cremation Service. Helen Lois Speratos was born August 28, 1943 in Santa Fe, New Mexico to Michael and Irene Speratos. Following high school Helen continued her education at Pueblo Community College, Pueblo, Colorado where she attained her LPN certification. She and Jim McLeod were married February 14, 1964 in Santa Fe, New Mexico and to this union three daughters were born. Helen worked in the healthcare field as an LPN in New Mexico and Colorado. From Colorado the family moved to California where they lived until 1980. Then they moved to Altus where Helen was a homemaker, a mother and a farmer's wife. When the children were older she began working for Altus Public Schools as an Assistant Secretary at Rivers Elementary School at Altus Air Force Base until her retirement in 2009. Helen was a volunteer at heart, providing transportation for patients to doctor's appointments; helping out at Operation Care; and cooking meals for the WOSC baseball players. She was a member of the Altus Christian Fellowship in Altus and cherished her time spent with family, her friends and especially her grandchildren. Helen was preceded in death by her parents and a brother, David Speratos. She is survived by her husband, Jim; three daughters, Kimberly Bonewitz and husband, Mike; Tamra O'Neal and husband, Keith; Kathleen Haskin and husband, Grant; six grandchildren, Michael Bonewitz, Michelle Bonewitz, Madison O'Neal, Miles O'Neal, Hannah Haskin, and Gage Haskin; one great granddaughter, Maybalee Bonewitz; her brother, Dale Speratos and wife, Glenda; her sister, Karen Price and husband, Charlie; and many nieces, nephews and friends. The McLeod family will greet friends Monday evening from 6 p.m. to 7 p.m. at Kincannon Funeral Home. Online tributes may be made at kincannonfuneralhome.com

The family of Helen McLeod created this Life Tributes page to make it easy to share your memories.

Send flowers to the McLeod family.