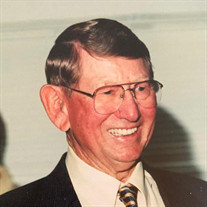 Jack Alton Drury, 96, passed away Thursday, April 23, 2020 in Wichita Falls, Texas. Private family graveside services have been scheduled for 2:00 PM, Monday, April 27, 2020 at the Boggy Cemetery with Brad Pryor officiating. Services have been entrusted to Kincannon Funeral Home and Cremation Service. Jack Alton Drury was born May 24, 1923 in a farmhouse located on the banks of the Red River, ten miles south of Olustee, Oklahoma. He was the third child of Wiley Oscar and Martha Ann (Willeford) Drury. Jack attended and graduated from Harmony High School in 1941. He worked on the family farm until 1946, when he enlisted in the U.S. Army. Jack was honorably discharged in 1947 when he returned to farm in Jackson County. In 1950 he was appointed Postmaster of the Olustee Post Office. Jack married Frances Thompson in 1958, who passed away in 1972. In 1963 he began serving as rural carrier for the Olustee Post Office. He married Marilyn Kay Gauger in 1973. That same year he transferred to Willow, Oklahoma and served there as rural carrier for twenty six years, retiring in 1999 after fifty years of service. Jack enjoyed his work as a postal carrier as well as farming and raising cattle. In 2007 Jack sold his farm and cattle operation and continued his love for playing the fiddle and guitar. In 2013 he and Marilyn moved to Haskell, Texas to be closer to their son. He made many new friends and organized a new music group called The Haskell County Jubilee. Jack is preceded in death by his parents; daughter, Jacki Drury; three sisters, Octavia Felty, Etta Jean Hestand, and Nelva Jo Fancher; and brother, Wiley Laverne "Red" Drury. Jack is survived by his wife Marilyn, of the home; three daughters, Lonna Doughten, Shelly Cooper and husband, Todd, Juli Mellard and husband, Travis; son, Darin Drury and wife, Mary; grandchildren, Wendy Doughten, Misty Reuter, LyShell Raven and husband, Michael, Tucker Mellard, and Clara Drury; great grandchildren, Mikail Reuter and wife, Savannah, Mikayla Reuter, Mikendell Reuter, Ketch Raven, and Preslee Raven; two sisters, Leveda Wagnon, and Mary Dahlin and husband, Darrel; two brothers, Billy John Drury and wife, Melva, and Henry K. Drury and wife, Judy. A Celebration of Life will be held at a later date. Memorial contributions may be made to the Knox County Hospital District @ 701 S E 5th St, Knox City, TX 79529 / 940-657-3535.

The family of Jack Drury created this Life Tributes page to make it easy to share your memories.

Send flowers to the Drury family.