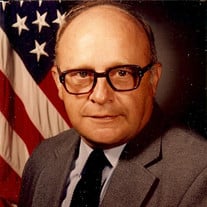 James R. Doner, 85, Olustee, passed away Saturday, February 22, 2020 at the Jackson County Memorial Hospital. Graveside services will be 2 p.m. Thursday, February 27, 2020 at the Victory Cemetery with Mick Mounce officiating under the direction of Kincannon Funeral Home and Cremation Service. James Rollins Doner was born September 5, 1934 in Burlington, Vermont to William Leo and Edith Mary (Edgerton) Doner. Following high school James married Alice Dumal on December 30, 1951 and enlisted in the United States Air Force in 1952. James continued his education at WOSC in Altus, earning his Associates of Arts Degree. While at Altus Air Force Base he attained his Bachelor of Science in Occupational Education through Southern Illinois University and later earned his Master of Arts in Criminal Law from Webster University. James retired from the U.S. Air Force, following 27 years of service, in 1979 as a Flight Engineer/Instructor with the rank of Master Sergeant. He then worked for 21 years in Civil Service, retiring in 2001. Jim and Alice were very active in their volunteer service with the Salvation Army. Following the death of his wife Alice in 2012, James and Ruby Flood were married May 12, 2015 in Vernon, Texas. Jim served on the Community Action Board, the Victory Cemetery Board, the Lions Club, the Masonic Lodge as well as other community projects. He enjoyed reading his Bible and was a member of the True Life Church. He was a farmer / rancher and really enjoyed sorting out fact from fiction with his coffee drinking buddies. Jim was preceded in death by his parents; his first wife, Alice; a brother, George and his two sisters, Clara and Eva. He is survived by his wife, Ruby; and his son, Dennis Doner and wife, Pam; and many, many friends. The Doner family will greet friends from 6 to 8 p.m. Wednesday evening at the funeral home. Online tributes may be made at kincannonfuneralhome.com

The family of James Rollins Doner created this Life Tributes page to make it easy to share your memories.

Send flowers to the Doner family.