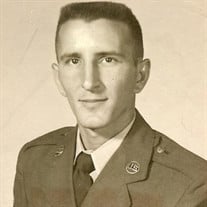 James W. "Jim" Kridler, 85, Altus, passed away at his home Monday, May, 18, 2020. Memorial services will be 2:00 PM Friday, May 22, 2020 at the First Baptist Church with Dr. Jeff Moore officiating. Services with military honors have been entrusted to Kincannon Funeral Home and Cremation Service. James Wesley Kridler was born on May 9, 1935 to William W. and Mabel T. (Downs) Kridler in Apollo, Pennsylvania. He graduated from Leechburg (Pennsylvania) High School with the class of 1953. He entered the United States Air Force on February 2, 1954 and served as a Radar Technician, retiring on March 1, 1974 as a Tech Sergeant. Jim married Bernadette L. "Bunny" Fox on February 19, 1955 at Keesler Air Force Base, Mississippi, and spent sixty five loving years together. The happy couple adopted a beautiful five month old baby girl named Linda. Linda married Kevin Howard and the Kridler’s were blessed with two granddaughters, Desarae Dawn and Nichole Lynn. While in service he worked part time at Morehead Kawasaki from 1974 to 1981 as a master technician. Jim worked as manager and contractor for CC Distributors at Altus Air Force Base from 1981 until his retirement in 2000. He was a member of the First Baptist Church in Altus, the American Legion, the Disabled American Veterans and the NRA. Jim enjoyed stock car racing at Quartz Mountain Speedway where he won several championships. Motorcycle touring, hunting and spending time with his family were favorites of his. Jim lived a full and happy life and God blessed him with many good friends. Jim was preceded in death by his parents, William and Mabel Kridler; and two brothers, Robert and Paul Fiscus. He is survived by his wife, Bernadette "Bunny," of the home; daughter, Linda Sue Howard; two granddaughters, Desarae Howard and Nichole Shaw; great grandson, Landen Breeze; two sisters, Carol DiSibio and Connie Nowry; and a host of friends. Online tributes may be made at kincannonfuneralhome.com

James W. "Jim" Kridler, 85, Altus, passed away at his home Monday, May, 18, 2020. Memorial services will be 2:00 PM Friday, May 22, 2020 at the First Baptist Church with Dr. Jeff Moore officiating. Services with military honors have been entrusted... View Obituary & Service Information

The family of James W. "Jim" Kridler created this Life Tributes page to make it easy to share your memories.

Send flowers to the Kridler family.