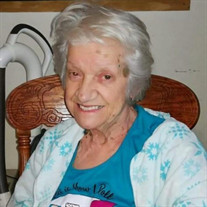 Janelle Wright, 87, Duke, passed away on Friday, February 26, 2021 in Mangum, Oklahoma. Graveside services will be 10:00 AM Monday, March 1, 2021 in the Eldorado Cemetery with Rev. Doug Altom officiating. Burial will be under the direction of the Kincannon Funeral Home and Cremation Service. Viewing will be held at the Kincannon Funeral Home in Altus from 1:00 – 5:00 PM Sunday, February 28, 2021. Janelle was born on May 30, 1933 in Erath, Louisiana to Felicien and Edith (Dominque) Leblanc. She was raised at Sacred Heart of Incarnate Word Academy in Houston, Texas. Janelle finished high school and won Miss Louisiana in 1951. She married Bill M. Wright in Houston, Texas on July 17, 1954. They moved to Katy, Texas and then moved to Duke, Oklahoma in 1989. Janelle was a homemaker for most of her life and owned and operated Janelle’s Country Fried Steakhouse in Duke for ten years. She was a member of the Catholic Church and enjoyed spending time with her family and playing bingo. Her parents, husband, and a sister, Audrey Warr, preceded her in death. Survivors include her children, Debbie Gutkowski, Linda Wright, Lisa Hunt, and Steve Wright and wife, Deborah; five grandchildren, Johnathan Gutkowski, Stephanie Wright, Stacie Wright, Joshua Harvey and wife, Tiffany, and Chase Hunt; six great grandchildren, Alyssa, Aliyha, Heath, Hunter, Ian and Evan; a sister-in-law, Watha Shanks; brothers-in-law, Alvin and Doc Wright; and many other nieces and nephews including Jimmy Warr and Janet Warr. Online tributes may be made at kincannonfuneralhome.com

Janelle Wright, 87, Duke, passed away on Friday, February 26, 2021 in Mangum, Oklahoma. Graveside services will be 10:00 AM Monday, March 1, 2021 in the Eldorado Cemetery with Rev. Doug Altom officiating. Burial will be under the direction... View Obituary & Service Information

The family of Janelle Wright created this Life Tributes page to make it easy to share your memories.

Send flowers to the Wright family.