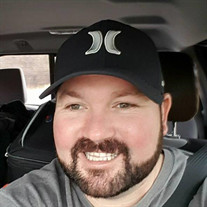 Jeffery Paul Kay, Jr. 33, Altus, passed away Friday, September 13, 2019 in Stillwater, Oklahoma. Memorial services have been scheduled for 3:00 PM, Tuesday, September 17, 2019 at the First Presbyterian Church with Erin Martinez officiating. Cremation and memorial services have been entrusted to Kincannon Funeral Home and Cremation Service. Jeffery was born May 13, 1986 to Jeffery P. and Sandra (Rush) Kay in Altus, Oklahoma. He attended grade school in Lawton and graduated from Elgin High School with the class of 2005. He had worked for Wilco Machine and Fab, Inc in Marlow, Oklahoma. Later, he worked as a crane operator, building wind turbines for Barnhart Crane and Rigging for several years. He enjoyed fishing, camping and the outdoors. His best times were spent with his son and his family. He was a baptized at the First Presbyterian Church in Altus, Oklahoma and was of the Christian faith. Jefferey is preceded in death by his life partner, Sean Henderson; grandmother, Janice Rush; great grandmother, Alyene Kay; and great-grandparents, Alfred and Maude Quick. He leaves behind to cherish his memory his son, Skyler Rolland; parents, Jeffery Paul Kay and wife, Sherry; and Sandy Rush Mathews; his sister, Ashley Kay; three brothers, Justin Kay; Landon Glenn and wife, Jennifer; and Logan Glenn; aunts, Sarah Kay and Janice Kloch; uncle, Greg Kay and wife, Cheri; grandparents, Hershel and Barbara Kay and Louis Rush; great grandfather, Paul Kay. He also leaves behind many other aunts, uncles, nieces, nephews and cousins as well as a host of friends. Online tributes may be made at kincannonfuneralhome.com

The family of Jeffery Paul Kay Jr. created this Life Tributes page to make it easy to share your memories.

Send flowers to the Kay family.