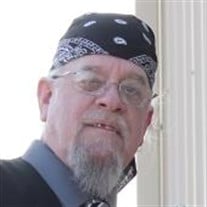 Jeffery Lee “Buck” Wilson, 65, Altus, passed away on Sunday, September 5, 2021 at the Jackson County Memorial Hospital. Memorial services will be 2:00 PM Saturday, September 18, 2021 at the Altus Church of God with Earnest Everman officiating. Arrangements are under the care of the Kincannon Funeral Home and Cremation Service. Jeffery Lee “Buck” Wilson was born on April 30, 1956 on the Barksdale Air Force Base in Bossier City, Louisiana to W. A. and Ovella Maxine (Ikerman) Wilson. After high school, he joined the United States Air Force and proudly served for 10 years. He was honorably discharged as a Sergeant on April 22, 1986. Buck married Connie (Hansen) Miller on February 18, 1986 in Mesa, Arizona. He worked construction for many years and worked at Altus Motorsports. He enjoyed working on motorcycles, especially his own. Buck loved riding his Harley trike and feeling the wind against his face. He was a former Associate Chapter F of the Legacy Vets Motorcycle Club. Buck enjoyed not only his Harley but fishing, hunting and camping, before his health declined. He loved his family and enjoyed spending time with them. His parents and a son, Thomas Miller, Jr., preceded him in death. Survivors include his wife, Connie, of the home; a daughter, Rebecca Green and husband, Chris; two sons, Josh Wilson and wife, Denelle, and Jeremy Wilson; a daughter-in-law, Valerie Miller; several grandchildren including Brittany Miller, Brooklyn Hunter and husband, Dacious, Carson Wilson and Trevlin Green; three brothers, Steven, James and Robert Wilson and wife, Robin; a sister, Pam Foster and husband, Mark; and many other family members and friends. Online tributes may be made at kincannonfuneralhome.com

The family of Jeffery Lee "Buck" Wilson created this Life Tributes page to make it easy to share your memories.

Send flowers to the Wilson family.