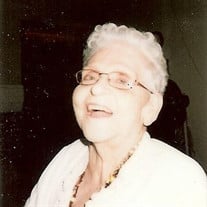 Jessie Lou Austin 85, former Altus resident passed away Friday, November 29, 2019 in Oklahoma City, Oklahoma. Funeral services have been scheduled for 11:00 am, Tuesday, December 3, 2019 at the Altus City Cemetery Memorial Chapel. Burial will follow in the Altus City Cemetery under the direction of Kincannon Funeral Home and Cremation Service. Jessie Lou Dodson was born October 22, 1934 to Jess and Lula Mae (Motheral) Dodson in Olustee, Oklahoma. She graduated from Altus High School with the Class of 1952 and continued her education at Altus Junior College. While in college she worked the concession stand at the Plaza Theater, and thus started a thirty year career of serving people at Braddock and Cumbee Drug and South Main Drug. She then worked for her brother, Keith, at Bunker Hill Pharmacy, where she made all their deliveries for fifteen years. As Jessie grew older her health slowed her down. She moved to Grace Living Center on SW 84th St. in Oklahoma City to be near her daughter, Pam. Jessie was a people person. She made a point to meet and talk to every new person she met while working at the drug stores as well as living at Grace. Jessie was a devout Christian and loved to attend church at First Baptist Church and First United Methodist Church in Altus and then at Grace, where she attended every service they offered and Bible studies. Jessie also took part in their skits and programs while at Grace. Jessie loved to play Bingo and was able to call once a week and help operate their little shop, where the residents were able to spend their bingo money. Jessie had a weakness for her fingernails, always having them painted for whatever holiday was approaching - sometimes different colors for different fingers. Jessie had an amazing memory. She remembered every birthday for everyone in her family - without a calendar or computer. She never failed to call about 15 family members each year and wish them Happy Birthday. Jessie was not a big sports fan but she did champion the OKC Thunder, and watch every game they played on television, even the ones that started at 9:30 PM. In 1956 Jessie married Don Woods of Altus Air Force Base and to them, one daughter, Pam, was born. Later in life she married Willie Austin, who preceded her in death in 2011. She is survived by her daughter, Pam Warden; one grandson, Jeremy Warden; one granddaughter, Jennifer Marzett and husband, Ron; a great-granddaughter, Destiny Marzett; her brother, Keith Dodson and wife, Judy; nephews, Mark Dodson and wife, Lisa; and Scott Dodson; a niece, Debbie Cox and husband, Robert; several grand nieces and grand nephews and many, many friends. Online tributes may be made at kincannonfuneralhome.com

The family of Jessie Lou Austin created this Life Tributes page to make it easy to share your memories.

Send flowers to the Austin family.