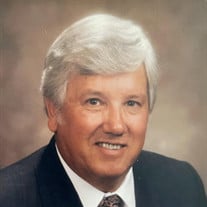 Jimmie Ray Billington was born July 27, 1930, in Harmon County at home and delivered by his grandmother Jencie Kellison. Jim was the second of four children born to Obie S. “Pete” Billington and Winnie Kellison Billington. Jim died on April 6, 2021, in Oklahoma City, peacefully and surrounded by his family. Jim attended many schools growing up, including Victory, Martha, and Blair. Jim was considered a fine athlete in his day. The story goes that Jim drove the bus to make some extra money for his family. He was driving for Martha, but Blair needed some help on their baseball team so they gave him 10 more dollars a month to drive for Blair, where he finished high school in 1949. Jim started college at Cameron University in 1949, attending one year before enlisting in the Air Force in 1950. Jim was honorably discharged in 1953 at the end of the Korean War. 1953 was a busy year for Jim, as he married his wife of 67 years Delores June Southall. Jim and June moved to Lawton and later Stillwater, where Jim earned his B.S. in Agriculture Education from Oklahoma State University. Jim’s first job out of college was with Oklahoma State University as Superintendent of the Lugert Altus Research station of Lone Wolf in 1956. In 1958, Jim and June moved with their two young daughters Denise and Rhonda to Madera California, where Jim had accepted a position as California Farm Advisor. While living in California, Jim and June’s family was completed with the birth of their third daughter Linda. In 1963, Jim took a one year paid leave to return to Stillwater and pursue his master’s degree. After completing his M.S. in Agriculture Economics, Jim returned to California to complete his commitment to the University of California extension program. In 1966 and while traveling the state of Kansas and Oklahoma as a bank examiner, he caught the eye of board President of the Woodward Oklahoma Production Credit Bank, John Dunn, who offered him the position of President of the PCA in 1967. Jim served in this role from 1967-1975 growing the bank to the largest lending PCA west of the Mississippi. In 1975 Jim and June moved to Beaver, Oklahoma, where he went to work as President and CEO of the 1st National Bank of Beaver. Jim and June returned back to full time farming and ranching in 1978, which they continued until retirement in 2013. Throughout his career, Jim was actively involved in the Democrat Party and was an ardent advocate for farmers and ranchers. Jim devoted his life to promoting agricultural policies on behalf of the farmers and ranchers of Oklahoma, in particular those of Southwestern Oklahoma where he grew up and lived a great deal of his life. After serving as president of the Wheat Growers Association of Oklahoma, later president of the National Association of Wheat Growers, president of the National Wheat Foundation, and being appointed by the Secretary of Agriculture to the Federal Grain Inspection Advisory Board, Jim's devotion to agricultural advocacy culminated in an appointment by President Ronald Reagan to the three-member U.S. Farm Credit Board in 1986. In 1989 Jim resigned from the Farm Credit Board to become president and CEO of the Minnesota Wheat Promotion Council and the Minnesota Wheat Growers Association. Throughout his life Jim remained a proud champion of the farmer and rancher, whether it was in the local coffee shop or the Capitol in Washington, D.C. As those who knew him realize, Jim remained a devoted Cowboys fan and proponent of Oklahoma State University his entire life. Jim achieved many accomplishments and received many accolades during his successful and storied career, but his greatest and proudest legacy is that of his wife, June, and his family, which he loved dearly. Jim was preceded in death by his parents, Pete and Winnie Billington, by his sister Betty Cosyns, brother-in-law Albert “Al” Cosyns, and brother Grady Billington, all of Madera, California. He is survived by his wife, June Billington, of Norman, Oklahoma, sister Pat Autrey and her husband Wendell of Katy, Texas, sister-in-law Janet Billington, of Madera, California, daughters Denise Cramer of Tulsa, Oklahoma, Rhonda and her husband Doug Snoeyenbos, of Arlington, Virginia, and Linda and her husband Michael Maberry, of Elk City, Oklahoma. Jim is also survived by his grandchildren Ashlee Crouch and her fiancé Ray Hall, Wade and Priya Cramer, Evan and Ryan Hunt, Cole and Candice Cramer, Seth Cramer, Will Snoeyenbos, and Eric Snoeyenbos. Jim and June were blessed with five great-grandchildren, Sophie Crouch, Edelin “Edie” Crouch, Peyton Hunt, Hayden Hunt, and Emersyn Hunt. Jim is also survived by many nieces and nephews, whom he loved and took great pride in. Funeral services will be 2 p.m. Saturday, April 10, 2021 at Kincannon Funeral Home in Altus, Oklahoma with Daniel Ingram officiating. Burial will follow services in the Blair, Oklahoma Cemetery under the direction of Kincannon Funeral Home and Cremation Service @ 580-482-1800. The Billington family will receive friends from 5:00 - 7:00 PM Friday, April 9, 2021 at the funeral home. Those wishing to honor Jim’s lifelong commitment to family and community can make donations in his name to the Westview Boys’ Home, P.O. Box 553, 120 W. Broadway, Hollis, Oklahoma 73550, or to a charity of choice. A live webcast of Mr. Billington’s service will be available beginning at 1:30 pm Saturday @ kincannonfuneralhome.com and clicking on his obituary. Online tributes may be made at kincannonfuneralhome.com

The family of Jim R. Billington created this Life Tributes page to make it easy to share your memories.

Send flowers to the Billington family.