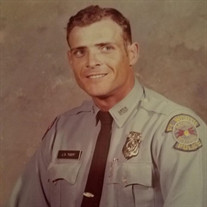 Jimmie Don Tigert, 75, passed away Tuesday, November 10, 2020 in Wichita Falls, Texas. Graveside services have been scheduled for 2:00 PM, Friday at the Eldorado Cemetery with Darrell Lutteringer officiating. Services are under the direction of Kincannon Funeral Home and Cremation Services. Jimmie was born September 14, 1945 to William Arthur and Kerwine Ruth (West) Tigert in Altus, Oklahoma. Jimmie attended schools in Eldorado and Snyder, Oklahoma. Jimmie served his country from 1962 to 1966 in the United States Air Force, and was Honorably Discharged as an Airman 1st Class. He attended Tarrant County Junior College in Ft. Worth, Texas, earning an Associate Degree in Law Enforcement in 1973 and continued his education at Texas Christian University, attaining a Bachelor Degree in Criminal Justice in 1975 and a Master Degree in Public Administration in 1977. Jimmie served on the Ft. Worth Police Department for thirteen years, from 1967 to 1980, where he received two Certificates of Merit, one in 1974 and one in 1978. Jimmie joined the FBI and served as an FBI Agent for six years until he retired in 1986. Jimmie had a love for horses, guns, and fishing in his younger days. He had a special love for a horse named “Trigger” that he loved to ride when he was young. Jimmie was a member of the Baptist Church. Jimmie is preceded in death by his father, in 2003; his mother in 2020; his son, Johnny Allen Tigert, in 1964; a sister, Judith Ann Dean in 1982 and brother, Bobby Neill Tigert, in 1963. Jimmie is survived by his sons, Jimmie Wayne and Jeffery Don Tigert; twelve grandchildren; five great-grandchildren; sisters, Jolene McLeod and husband, John, Benita Fischer and husband, Jimmy and Beverly Sturgeon and husband, Joey. He is also survived by several nieces and nephews. Online tributes may be made at kincannonfuneralhome.com

Jimmie Don Tigert, 75, passed away Tuesday, November 10, 2020 in Wichita Falls, Texas. Graveside services have been scheduled for 2:00 PM, Friday at the Eldorado Cemetery with Darrell Lutteringer officiating. Services are under the direction... View Obituary & Service Information

The family of Jimmie Don Tigert created this Life Tributes page to make it easy to share your memories.

Send flowers to the Tigert family.