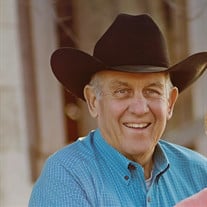 John Henry Gallagher, Jr. 68, passed away Friday, July 5, 2019 at his home in Gould, Oklahoma surrounded by his family. Funeral services have been scheduled for 2:00 PM, Tuesday, July 9, 2019 at First Baptist Church in Hollis Oklahoma with Rev. Glen Alley officiating. Burial will follow at the Gould cemetery under the direction of Kincannon Funeral Home and Cremation Service. John was born February 8, 1951 to John H. Gallagher Sr. and Bobbie (Comp) Gallagher in Norman, Oklahoma. He attended Altus Public Schools and graduated from Blair High School with the Class of 1969. He married Judie Altom on August 15, 1970 in Blair, Oklahoma. They were blessed with two children, Ryan and Amanda. John continued his education, graduating Oklahoma State University with a Bachelor of Science in Animal Science and Agriculture Education. While serving as an FFA Advisor, he was able to realize his dream of owning his own land. He remained the FFA Advisor until Gould School closed in 1990. He then stepped into a new arena with Gallagher Insurance Agency which he maintained until his death. John and Judie placed a premium on their faith and attended the First Baptist Church of Gould. They subsequently attended the First Baptist Church in Hollis. John had a symmetrical passion for his family and his work, but he also believed deeply in civic duty. Throughout his life, he was nominated or volunteered for numerous civic organizations and maintained his service throughout his life. John was preceded in death by his parents, John and Bobbie Gallagher; his Father-in-law and Mother-in-law; Cloyd and Gayle Altom, and one brother-in-law; John Cargal. John leaves behind his wife Judie, of the home; son, Ryan Gallagher and wife, Tatum; daughter, Amanda Burrell and husband, Ben; six grandchildren, Cale, Luke and Emma Claire Gallagher, Madilyn, Jolie and Jace Burrell; three sisters, Joan Graham and husband, Rick; Anne Altom and husband, James; Helen Mason and husband, Clay; three brothers, Jim Gallagher and wife, Rita; Robert Gallagher and wife, Denise; and Pat Gallagher; brothers and sisters-in-laws, Rowan Wicker and husband, Dink; Navone Staggs and husband, Donald; Derrall Altom and wife, Fran; Donald Altom and wife, Donna; Doug Altom and wife, Jayme; Pat Warren and husband, James; Jean Cargal; Mike Altom and Sonya Tutten; numerous nieces, nephews and many friends. The Gallagher family will greet friends from 6:00 to 7:30 PM, Monday, July 8 at the Kincannon Gathering Room. Memorial contributions may be made to the Jackson Harmon County OSU Alumni Association; the Harmon County Ministerial Alliance or the Gould Cemetery Association .

The family of John Gallagher created this Life Tributes page to make it easy to share your memories.

Send flowers to the Gallagher family.