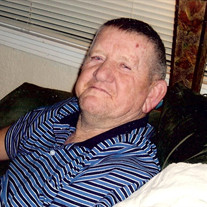 John McMahan, Jr., 72, passed away at his home north of Altus on January 2, 2019. Funeral services have been scheduled for 2:00 PM, Friday, January 4, 2019 at the Kincannon Memorial Chapel with Rev. Gary Usher officiating. Burial will follow services at the Altus City Cemetery under the direction of the Kincannon Funeral Home and Cremation Service. John was born on September 16, 1946 to John and Ina Mae (Mills) McMahan, Sr. in Childress, Texas. He graduated high school in Quanah, Texas. John worked in construction most of his life and was a member of the Rose Assembly of God Church. He always had a smile and a hello for everyone he encountered, he didn't know a stranger. In his younger years, he would visit area nursing homes and entertain the elderly by singing church hymns and praise music. John had such a zest for life and he devoted himself to caring for those he loved. John enjoyed watching WWE wrestling, OSU football, Thunder Basketball and cheering on the Navajo Indians. His time spent with family was his greatest treasure. John is preceded in death by his parents, a daughter, Christina Martinez, and a brother, Charles Cox. He leaves behind two sons, Stephen McMahan and J D McMahan; grandchildren, Adriana, Javi, Stephanie, John, Kaithlynn, Marcus and Ronnie: his sisters, Dorothy Bramblow and Pauline Loveless; brothers, Paul Briscoe and David Knowles; his sister, Linda Cox, and James and Monica Cox; his special nieces, Damaris, Chelsea and Cassi Cox; his special nephews, Dallas and Devon Cox; and many other friends. The McMahan family will greet friends Thursday evening from 6 to 8 PM at the Kincannon Gathering Room. Family and friends unable to attend may log on to kincannonfuneralhome.com, 30 minutes prior to the service, to view the live webcast of the funeral. Online tributes may be made at kincannonfuneralhome.com

John McMahan, Jr., 72, passed away at his home north of Altus on January 2, 2019. Funeral services have been scheduled for 2:00 PM, Friday, January 4, 2019 at the Kincannon Memorial Chapel with Rev. Gary Usher officiating. Burial will follow... View Obituary & Service Information

The family of John McMahan, Jr. created this Life Tributes page to make it easy to share your memories.

Send flowers to the McMahan, family.