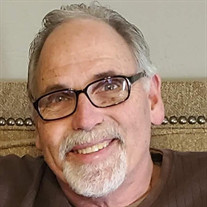 John Winston Thornton, Jr., of Altus went home to Jesus on August 3, 2021, after a hard-fought health battle at the age of 63. A celebration of life will be officiated by Kevin Baker and held at 10:00 am on Monday, August 9, 2021, at Kincannon Funeral Home in Altus, Oklahoma. Born on December 9, 1957 in Pasadena, Texas to John Sr. and Mary (Underwood) Thornton, John was the second oldest of four children. Throughout his childhood the family traveled the world while his dad served our nation in the United States Airforce until they settled in Altus, Oklahoma in 1970. John graduated from Altus High School in 1976 and went to work for United Supermarkets. Having a great work ethic, he advanced quickly and eventually managed his own store in Cherokee, Oklahoma. He married Kim McNeill in 1979 and had two sons, Timothy John and Chad Michael. In 1989 he married Marilyn Campbell and welcomed a baby girl, Maegan Elizabeth, in 1990. Living in Yukon John worked for Jay-Don and continued to be devoted Dad. He enjoyed hunting and fishing trips with Chad and TJ and daddy daughter dates with Maegan. In 1999 John went to work in Altus as the general manager for several restaurants under Forest Ray. In 2010 John purchased the Backdoor Steakhouse, The Orient Drugstore, and Three Rivers Catering. This same year he met his loving wife Kathy Baker-Thornton and added sons Brady and Tobyn Baker to the family. Looking forward to retirement and more time with his wife, kids, and grandkids, John sold his businesses 2020. John will forever be remembered for his contagious smile, goofy sense of humor, and ability to spot ten-point buck from five miles away while driving. He was a huge lover of his family, warm chocolate cake and ice-cold milk, and all things outdoors. He enjoyed riding his Harley, spending time with his kids and grandchildren, and golfing. John was dedicated and baptized into the kingdom of God upon birth and became a follower of Jesus Christ as an adult. John was preceded in death by his mother, Mary Jo Bulriss; two sisters, Brenda (Groves) Barnhart and Tina Barnes; and his stepmother, Diane “Dee Dee” Thornton. He is survived by his wife, Kathy of Altus; daughter Maegan Thornton; sons, T.J. Thornton and wife, Jennette, Chad Thornton and wife Jenna, Brady Baker and wife Laci, and Tobyn Baker and wife Katie; grandchildren, Jayden Thornton, Mason Thornton, Kinkade Thornton, Trypton Thornton, Jaxton Baker, Kason Baker and Madilyn Baker; his father John W. Thornton, Sr.; brother Mike Thornton and wife Tammy, Bill Pember and wife Stephanie and many nieces and nephews. Online tributes may be made at kincannonfuneralhome.com

John Winston Thornton, Jr., of Altus went home to Jesus on August 3, 2021, after a hard-fought health battle at the age of 63. A celebration of life will be officiated by Kevin Baker and held at 10:00 am on Monday, August 9, 2021, at Kincannon... View Obituary & Service Information

The family of John W. Thornton Jr. created this Life Tributes page to make it easy to share your memories.

Send flowers to the Thornton family.