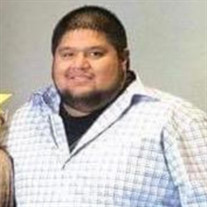 Jonathan Robert Favela, 29, Altus, Oklahoma, passed away on Saturday, September 26, 2020 at his home. Funeral services will be 2:00 PM Wednesday, September 30, 2020 in the Kincannon Memorial Chapel with Clint Rogers officiating. Burial will be 2:00 PM Thursday, October 1, 2020 in the Llano Cemetery, Amarillo, Texas, under the direction of the Kincannon Funeral Home and Cremation Service. Jonathan Robert Favela was born on November 30, 1990 in Amarillo, Texas to Robert and Martha (Najera) Favela. He was raised in a Christian home and graduated from Weatherford High School in Oklahoma in 2009. Jonathan accepted Jesus Christ as his Lord and Savior at an early age and he was very active in his church. He was a member of Thrive Church, in Altus, where he was the media director. Jonathan loved working with the youth and was a member of the Aftermath Worship Team. The gift of music was one of his spiritual gifts that he used to not only worship the Lord but to share the Lord with others. His paternal grandparents, Joel, Sr. and Cruz Favela, preceded him in death. Survivors include his parents, Robert and Martha Favela; two brothers, Robert Favela, Jr. and wife, Tiffany Dintelman, and Joshua Robert Favela and wife, Season; a sister, Anna Favela; his maternal grandmother, Maria Chavez; three nephews, Joshua Asher Favela, Josiah Robert Favela and Reese Favela; three nieces, Adeline Cruz Favela, and Isabela and Gabriella Salinaz; as well as many other family members and friends. Online tributes may be made at kincannonfuneralhome.com

The family of Jonathan Robert Favela created this Life Tributes page to make it easy to share your memories.

Send flowers to the Favela family.