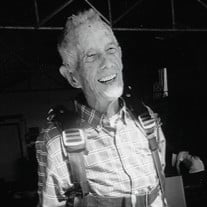 Joseph Leonard “J.L.” Tucker, 97, Elmer, passed away on Sunday, June 13, 2021, in Altus. Funeral services with US Navy honors will be 2:00 PM Friday, June 18, 2021, in the Kincannon Memorial Chapel with Lynn Rudd officiating. Inurnment will take place at a later date in the Hess Cemetery, south of Altus. Arrangements are under the care of the Kincannon Funeral Home and Cremation Service. Joseph Leonard Tucker was born on January 19, 1924, in Hess, Oklahoma to Wiley and Kate (Mayo) Tucker. He grew up in the Hess area and graduated from the Southside School in 1941. J.L. enlisted in the US Navy and was a veteran of World War II. He married Ruth Elizabeth “Betty” Sly on April 22, 1944, in Long Beach, California. After his discharge, J.L went on to get his master’s degree in Banking and Finance from the University of California – Berkeley. He started his banking career with Bank of America from 1945 – 1952. He worked in San Francisco, Los Angeles, and Kansas City, and opened the first ever Bank of America office in Tokyo, Japan. In 1952, J.L. went to work for Crocker National Bank and retired in 1972 as Vice President after 20 years. He married Ruth Ellen Day on December 15, 1970, in Centerburg, Ohio. He was of the Baptist faith and enjoyed hunting and fishing. He enjoyed all sports but especially OU sports and was an avid Sooner Football fan. J.L. was preceded in death by his parents; first wife, Ruth Elizabeth; and five sisters, Peggy Lou Jackson, Blanche Louise Booth, Billye McLaughlin, Joyce Burrow and Fern Hasty. Survivors include two brothers, Jimmie Dan Tucker of Texas, and Bob Tucker of Oklahoma; two daughters, Jean Tucker of Texas, and Cathy McIver of Florida; three sons, Bill Tucker of Oklahoma, Bob Tucker of Kansas, and David Tucker of Virginia; 13 grandchildren; 7 great grandchildren; and many other family members and friends. The family will receive friends from 6:00 – 8:00 PM Thursday at the funeral home. Memorial contributions may be made to the City of Altus Animal Shelter, 2200 Enterprise Drive, Altus, OK 73521 or online at: www.amazon.com/hz/wishlist/ls/GGDKAIYRV5XT Online tributes may be made at kincannonfuneralhome.com

The family of Joseph Leonard Tucker created this Life Tributes page to make it easy to share your memories.

Send flowers to the Tucker family.