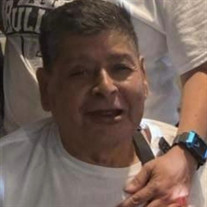 Juan “Johnny” A. Avila, 75, Altus, passed away, Sunday, February 6, 2022 at OU Medical Center in Oklahoma City. A Rosary will be held at 6:00 p.m. on Wednesday February 9, 2022 in the Kincannon Memorial Chapel. Funeral services will be held at 1:00 p.m. on Thursday, February 10th with Deacon Euless Mobley officiating. Burial will follow services at the Altus City Cemetery with military honors. Arrangements are under the direction of Kincannon Funeral Home and Cremation Service. Johnny was born January 28, 1947 in Hutto, Texas to Germinal and Consuelo (Ancira) Avila. He attended school in Texas and worked locally until he was inducted into the United States Army June 2, 1966. He was honorably discharged from active-duty June 3, 1968 as a Tech Sergeant. Johnny then served in United States Army Reserve until his discharge in June of 1972. He worked in the construction business as a concrete finisher in the Altus area for many years until his retirement in 2003. Johnny and Augustina Cardona were married June 17, 2006 in Altus, Oklahoma. He was of the Catholic faith; enjoyed Dallas Cowboy and OU Sooner football; cooking outside and spending time with his family and friends. He was especially noted for his “world famous” barbeque chicken. Johnny was preceded in death by his parents, Germinal and Consuelo; his wife, Augustina; daughter, Teresa Avila; and three brothers, Thomas, Herman, Jr, and Jimmy Avila. He is survived by three daughters, Marie Avila; Audrey Avila and husband, John Alcorta; and Nicole Avila and husband, Carlos Vincent; two sisters, Corina Touchstone and Mary Avila; two brothers, Pedro Avila and wife, Yolanda; and Robert Avila and wife, Lori; 6 grandchildren, Brittany Soward, Mikayla Soward, Dakota Soward, Addison Soward, Jeremy Alcorta, and Andrew Alcorta; 1 great grandchild, Lia Alcorta; and many friends. Online tributes may be made at kincannonfuneralhome.com

The family of Juan "Johnny" Avila created this Life Tributes page to make it easy to share your memories.

Send flowers to the Avila family.