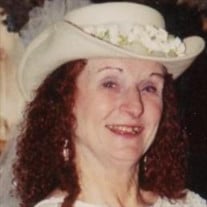 Judith Ann (Garrison) Fladland, 83, former Altus resident, passed away on Sunday, October 24, 2021, at her home in Stagecoach, Nevada. Funeral services will be at 2:00 PM on Friday, November 4, 2021 at the Kincannon Memorial Chapel with Rev. Doug Altom officiating. Burial will follow in the Altus City Cemetery under the direction of the Kincannon Funeral Home and Cremation Service. Judith Ann Garrison Fladland was born October 11, 1938, to Thomas Wayne and Thelma Sandy (Grider) Garrison in Altus, Oklahoma. Her family lived in California for a few years. When she was five years old, she contracted infantile paralyses (polio) and spent a month in an iron lung in Bakersfield, CA. Even as a child she was a strong fighter. After moving back to Altus, her mother married Ralph “Bud” Dillon. He adopted her and her siblings, giving them a happy and stable home. Judy attended Altus Public Schools and married Delbert Smotherman. To this union two daughters were born, Debra and Brenda. She later married Van Eric Pitman. After Suzie Q was born, they moved to Jasper, Indiana. Judy was a gifted and talented individual. She learned to sew sitting on her mother’s knee. Judy could play the piano and paint beautifully; she loved genealogy and traced the family back to when they came to America. Judy was a member of the Anna Lee Chapter of the D.A.R. After returning to Altus from Indiana, she started attending the Senior Citizen dances where she met a cowboy who loved to dance. Richard “Gabby” Fladland became her permanent dance partner November 7, 1998, in Incline Village, Lake Tahoe, Nevada. They moved there for Gabby’s work and loved being a part of the western community. The couple established the “Badges, Bandits and Bloomers” Old West re-enactors and Judy made all their costumes. Gabby and Judy performed at Virginia City and other towns for tourists, where they loved riding their horses together. Judy became quite the cowgirl as a result of their newfound lifestyle. Judy was loved by her family and many friends. She leaves behind her husband, Richard Gabby Fladland; her daughters, Debra Knebel and husband, Mike, Brenda Pitman and partner, Sandie Cobb, and Suzie Q Klem and husband, Matt; two brothers, Phillip Garrison and wife, Marjorie and Steve Garrison and wife, Linda; her sister, Janet (Dillon) Wright and husband, Cecil Wright; four grandchildren; seven great grandchildren; a cousin, Marion (Grider) Stephen; a host of nieces and nephews; and all of her Nevada friends. She was preceded in death by her father, Wayne Garrison; mother, Sandy Dillon; stepfather Bud Dillon; and one brother, James Smith Dillon. Online tributes may be made at kincannonfuneralhome.com

Judith Ann (Garrison) Fladland, 83, former Altus resident, passed away on Sunday, October 24, 2021, at her home in Stagecoach, Nevada. Funeral services will be at 2:00 PM on Friday, November 4, 2021 at the Kincannon Memorial Chapel with Rev.... View Obituary & Service Information

The family of Judith A. Fladland created this Life Tributes page to make it easy to share your memories.

Send flowers to the Fladland family.