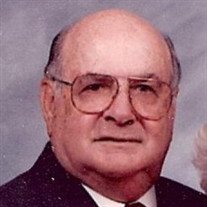 Kenneth W. Ashcraft, 88, Altus, passed away Sunday, June 7, 2020 at his home. A private family service will be held following cremation provided by Kincannon Funeral Home and Cremation Service. Kenneth Wayne Ashcraft was born December 8, 1931in Altus, Oklahoma to James Robert and Lillie Alene (Ellis) Ashcraft. He attended Altus Public Schools and Duncan Public Schools. Kenneth served his country during the Korean War in the United States Navy and upon his return began work with the Bell Telephone Company. He married Bobbie J. Allen in Whorton County, Texas July 5, 1953 and began work for the Jackson Oil Field Drilling Company in Duncan, Oklahoma the same year. He then worked for the General Baking Company in Elk City, Oklahoma from 1958 to 1960 and owned Elk Music and Hobby Shop in 1961 when he sponsored the radio music show “High Noon Roundup.” Kenneth later worked for the Morton Food Company until 1964 when he bought the Dairy Mart and moved to Altus, Oklahoma. He and his brother, Boyce Ashcraft, opened the Homeland Furniture Company in 1978 on South Main in the old George C. Wright building and closed it in 1981. Kenneth worked as Manager for Malone products for five years, then moved back to Altus to help his friend, Flash Gordon, at Southwest Metal Company in 1989. Kenneth worked the next 15 ½ years as a crop adjuster until his retirement in August of 2005. He was a member of the Emmanuel Baptist Church and worked as a volunteer for several years. Kenneth enjoyed fishing; playing guitar, banjo, ukulele and mandolin; was a member of the Clinton and Elk City Lions Club and he loved spending time with his family and grandchildren. Kenneth was preceded in death by his parents and one brother, J. R. Ashcraft. He is survived by his wife, Bobbie; two daughters, Terri King and husband, Ron; Sherri Ashcraft; one son, Kenneth W. Ashcraft, Jr. and wife, Tonya; two brothers, Boyce Ashcraft and wife, Gail; and Chuck Ashcraft and wife, Charlene; five grandchildren, Brooks Whiteside; Perry Ashcraft and wife, Audriana; Tyler Ashcraft and wife, Heather; Hannah Roberts and husband, Will; and Leah Wright and husband, Christian; five great grandchildren, Ryley and Dexter Ashcraft; Abree and Alex Wright and London Roberts and many friends

The family of Kenneth Wayne Ashcraft created this Life Tributes page to make it easy to share your memories.

Send flowers to the Ashcraft family.