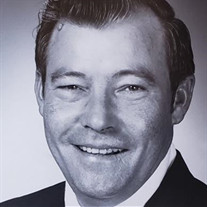 Kenneth Hargrove, 76, Blair, passed away Thursday, November 12, 2020 in Altus. The family will hold a memorial service at a later date. Services have been entrusted to Kincannon Funeral Home and Cremation Service. Kenneth Lloyd Hargrove was born November 3, 1944 to Elson and Elizabeth (McDowell) Hargrove in Pryor, Oklahoma. Kenneth graduated from Warren High School with the Class of 1963. He served his country in the United States Air Force, being honorably discharged as a Staff Sergeant in 1969. He continued his faithful and devoted service to the nation as a federal civilian at Altus Air Force Base where he retired in May 2000 as a Shift Supervisor of the Isochronal Maintenance Inspection (ISO Dock). He gave a combined total of 32 years of service to the U.S. government. He transported mail between Lawton and Hollis from 2000 to 2011. He continued his American dream of being a farmer, proud father, grandfather and friend. Kenneth married Marsha Johnson on April 24, 1971. Marsha preceded him in death along with his parents; daughter, Jennifer Hargrove; brother, James (Jim) Hargrove and son-in-law, Victor Englett. He is survived by his two daughters, Terri Srikoon and husband, Dech, and Stephanie and Michael Marcha; one son, Kevin Hargrove; a sister, Kathryn Goolsby; two brothers, Elson P. Hargrove, Jr. and wife, Joyce, and Roy Hargrove and wife, Elodia; eight grandchildren, Ashley and Alexander Srikoon, Michael and Jason Richmond, Colby and Emily Englett, and Paityn & Elyzabeth Marcha; as well as a host of other family and friends. Online tributes may be made at kincannonfuneralhome.com

Kenneth Hargrove, 76, Blair, passed away Thursday, November 12, 2020 in Altus. The family will hold a memorial service at a later date. Services have been entrusted to Kincannon Funeral Home and Cremation Service. Kenneth Lloyd Hargrove was... View Obituary & Service Information

The family of Kenneth Hargrove created this Life Tributes page to make it easy to share your memories.

Send flowers to the Hargrove family.