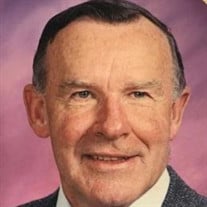 Kenneth Fred Schien, 87, formally of Wright City, Missouri, passed away on Friday, September 3, 2021 at the Grace Living Center in Mangum, Oklahoma. A private family memorial service will be held at a later date at Jefferson Barracks National Cemetery in St. Louis, Missouri. Local arrangements are under the care of the Kincannon Funeral Home and Cremation Service. Kenneth Fred Schien was born on May 25, 1934 in Alhambra, Illinois to Louis and Minnie Schien. He grew up in Illinois and after high school graduate, joined the US Army. Kenneth served as a heavy truck driver and was honorably discharged. He married Joyce Ethel May on February 14, 1959. Kenneth worked in fabrication for GW Composites for many years and retired as the Tooling Superintendent. During this time, he also owned and operated his own lawn care business, Carefree Lawns. He was a former member of the Christ the King Lutheran Church in Florissant, Missouri. He enjoyed camping, traveling, gardening, planting and spending time with his family. His parents, wife, a brother, Clarence, and three sisters, Ruth, Millie and Elva, preceded him in death. Survivors include a daughter, Joy Lynn Schien; two sons, David Kenneth Schien and wife, Annette, and Jeffrey Todd Schien and wife, Valeta; 8 grandchildren; 13 great grandchildren; three brothers, Darrell Schien, Leon Schien and wife, Audrey, and Kermit Schien and wife, Ruth Ann; a brother-in-law, Dave May and wife, Phyllis; as well as many other family members and friends. Online tributes may be made at kincannonfuneralhome.com

The family of Kenneth Fred Schien created this Life Tributes page to make it easy to share your memories.

Send flowers to the Schien family.