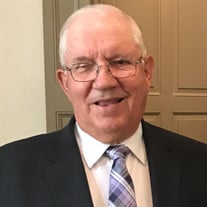 Larry Coke, 73, formerly of Altus, passed away Sunday, September 12, 2021 in Lubbock, Texas. Funeral services will be at 10 a.m. Saturday, September 18, 2021 at the Elm and Hudson Church of Christ in Altus, Oklahoma, with his grandsons, grandson by marriage, and two sons-in-law officiating. Burial will follow services at the Eldorado Cemetery under the direction of Kincannon Funeral Home and Cremation Service. Larry Alan Coke was born December 11, 1947, in Quanah, Texas to Troy and Ima (Sheehan) Coke. He attended Eldorado Public School his whole life, graduating with the Eldorado High School Class of 1966. Larry served six years in the Oklahoma Army National Guard. He then enrolled at Southwestern State University in Weatherford, graduating in 1972, with a Bachelor of Science in Industrial Arts and a minor in Physical Education. While in college Larry and some friends organized a rodeo club. Larry’s nickname during his roping days was “Loop”. Larry married Donna Francis October 19, 1973 in Hollis, Oklahoma. They had two daughters, Lori and Kimberly. Larry wanted to be a farmer his whole life. When he was young he would say he wanted to be a farmer because they got dirty. He loved riding the tractor with his Daddy from the time he was really little. Troy would ask him if he was sleepy and his head was hitting the steering wheel, but Larry would always say no. He competed in the very first Jackson County 4-H Tractor Driving Contest when he was 12 and won 1st place. He went on wheat harvest with his uncle Carl Richeson every summer for five years beginning when he was 15 and until after his first year of college. He farmed in the summers and later full time in Eldorado until 1984. He became the manager for the Eldorado Farmer’s Co-op in 1983, then in 1990 became a Field Representative for the Producer’s Cooperative Oil Mill. He worked for PCOM for 21 years. When Larry and Donna moved to Lubbock, Texas, in 2012, Larry sacked groceries at United Supermarket and quit in 2020. Larry served as a Board Member for the Eldorado Public Schools, was an Eldorado volunteer firefighter, a member of the Lion’s Club, then later served on the Oklahoma Coop Council as a board member. His greatest joy was spending time with his family and his grandchildren. Larry is preceded in death by his parents, Troy and Ima Coke; and his grandson, Caleb Waugh. He is survived by his wife, Donna; his two daughters, Lori Waugh and husband, Joe; and Kimberly Moore and husband, Craig; seven grandchildren, Lauren (Waugh) Tortella and her husband, Ty, Zachary Waugh and his wife, Taylor, Jacob Waugh, and Tyler Waugh, Blake Moore, Emily Moore, and Townley Moore; his brother, Mark Coke and wife, Catherine; two brother-in-laws, Billy Francis and wife, Corky and Tommy Francis and wife, Sharyn; two aunts, Elsie Byrd and Irene Ritchey; several nieces and nephews; and many cousins and friends. Larry was a member of the church of Christ and had worshipped with the Green Lawn church of Christ since moving to Lubbock. His favorite scripture was 1 Thessalonians 4:16-18. Online tributes may be made at kincannonfuneralhome.com. Memorials may be made to Tipton Children’s Home, P.O. Box 370, Tipton OK 73570, or at tiptonchildrenshome.com.

Larry Coke, 73, formerly of Altus, passed away Sunday, September 12, 2021 in Lubbock, Texas. Funeral services will be at 10 a.m. Saturday, September 18, 2021 at the Elm and Hudson Church of Christ in Altus, Oklahoma, with his grandsons,... View Obituary & Service Information

The family of Larry Alan Coke created this Life Tributes page to make it easy to share your memories.

Send flowers to the Coke family.