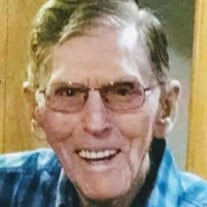 Leonard Hestand, 103, Altus, passed away on Saturday, May 16, 2020 at Jackson County Memorial Hospital. A funeral service for family and close friends will be held at 10:00 AM Friday, May 22, 2020 at the Martha Road Baptist Church with Kevin Baker officiating. Burial with military honors will follow in the Olustee Cemetery under the direction of the Kincannon Funeral Home and Cremation Service. Social distancing rules will apply and the service will also be available via Facebook Live on Martha Road Baptist Church. Leonard Hestand was born on May 27, 1916 in Chico, Texas to Newt Howard and Essie Minnie (Whisenhunt) Hestand. When Leonard was three years old, Newt and Essie brought their family in a covered wagon to the Red River south of Olustee, where they and their 10 children farmed the land. Leonard spoke fondly of these years, reminiscing about horse races with his brother Howard on the river bed and chasing his little sister Eva. He developed a love of horses, cattle, and cars, including a Model A that was a source of great pride. In 1936, Leonard graduated from Harmony School and continued farming until 1942, when he enlisted in the US Army Air Corps. Leonard served for four years and was a veteran of WW II, including a tour in Guam. In 2014, Leonard flew to Washington, DC on a WW II Honor Flight, but was always humble about serving his country. When asked about what he learned from his military experience, he shared, “The most important thing I learned is when you are called up to do a job, whatever it is, do it correctly and with pride and honor.” Leonard married Mary Fancher in 1948 and they became proud parents to Mark and Phyllis. He continued to farm and also learned the trade of stone masonry. In 1970, he began work for the county road and bridge department, which he continued until his retirement. In January 1973, Leonard married Evelyn Wagnon and to his joy, he gained a daughter, Rhonda. Leonard and Evelyn moved from Olustee to Altus in 1983, where he resided until his death, having lived 100 years in Jackson County. Leonard enjoyed spending time with family, riding around the countryside looking at the land and livestock, and gardening and working in the yard, often with his dog Brittany at his side. He could often be seen sitting on his front porch, enjoying visits from friends and neighbors, as he approached his 104th birthday. While losing him brings great pain, we find comfort in a life well lived and the many memories he leaves behind. Leonard is preceded in death by his parents, wife Evelyn, son Mark, and his nine brothers and sisters (Charlie, Elmetta, Howard, Eva, Virgil, Mable, Ora, Erie, and Maudie). What a joyous reunion they are having in heaven! Leonard is survived by two daughters, Phyllis Garofalo and husband, Bob, and Rhonda Merrimon and husband, Don; daughter-in-law, Kim Hestand; grandchildren Brandon, Stefani, Charlie, Betsy, and Crissa; 11 great-grandchildren, and many cousins, nephews, nieces, family, and friends. The family wishes to thank Carol Buchanan and Amanda Redding for providing care and support to Leonard each day in his home for the past few months, which helped him to continue living independently, as well as the team from Meals on Wheels. Leonard enjoyed the good meals but more than that, the conversations. In Leonard’s last days at Magnolia Creek Skilled Nursing and Rehab, Jordan Castillo was a great comfort and in his final hours at Jackson County Memorial Hospital, when family could not be at his side due to restrictions, Amanda Boyd held his hand, video-called family for him, and served as his surrogate family as he passed away. The family is so grateful for the support of these healthcare providers. The family will receive friends from 6:00 - 8:00 PM Thursday at the funeral home. Social distancing rules will apply while in the funeral home. In lieu of flowers, the family suggests memorials to the Altus Senior Center (Meals on Wheels), the Olustee Cemetery Fund, or the Altus VFW. We also encourage you to have a plate of biscuits and gravy, Leonard’s proclaimed secret to a long and happy life. Online tributes may be made at kincannonfuneralhome.com

Leonard Hestand, 103, Altus, passed away on Saturday, May 16, 2020 at Jackson County Memorial Hospital. A funeral service for family and close friends will be held at 10:00 AM Friday, May 22, 2020 at the Martha Road Baptist Church with Kevin... View Obituary & Service Information

The family of Leonard Hestand created this Life Tributes page to make it easy to share your memories.

Send flowers to the Hestand family.