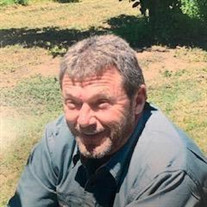 Les Lambert of Altus, Oklahoma, passed away on September 11, 2019, in Altus at the age of 65 years. Leslie Coy Lambert was born April 1, 1954, in Richland, Virginia, to Clyde and Mazie (Wampler) Lambert. Les attended schools in Honaker, Virginia. After graduating from high school, Les spent four years in the United States Air Force. He then furthered his education at OSU Vo-Tech in Oklahoma City, where he obtained his contractor’s license to install commercial, industrial and conventional heating and air conditioning systems. He became quite an expert in all aspects of that business, from the practical parts to the very technical workings of the machines. He was a “people person” with a great “gift of gab” and could visit and talk with people from virtually all walks of life. He was a long-time owner/operator of Les Lambert Heat & Air in Altus, Oklahoma, starting his business in 1993 and retiring in 2016, when he became ill. Les was a member of the First Baptist Church, Altus, Oklahoma, and often spent time helping the less fortunate of that community, working with the ones who were recovering from addictions and other difficulties. Les liked to spend time with his numerous grandchildren, and he loved every one of them. He loved Oklahoma Football, and spending time at Lake Lugert where he owned a cabin. He loved the outdoors, especially deer hunting and elk hunting, and then hunting whatever was in season. Les was preceded in death by his father, Clyde Lambert. Les is survived by his mother, Mazie Lambert, of Honaker, Virginia; his wife, Mary Lambert, of their home; four brothers; Carlon Lambert & wife Mattie, of Crestview, Florida, Larry Lambert of Honaker, Virginia, Lanny Lambert & wife Angie of Hickory, North Carolina and Kip Lambert & wife Cindy of Lebanon, Virginia; one sister, Sharon Owens of Honaker, Virginia; three daughters, Jennifer Umana & husband Chris Umana, of Atlanta, Georgia, Erin Lambert and Chris Mercer of Altus, Oklahoma and TaKara & husband Montae Boughton of Altus; three sons; Terry Gilbert & wife Suzanne, of Altus, Tyler Martinez of Altus and Jeremy Lambert and wife Amy, of New Mexico; fifteen grandchildren, Andrea Russell, Andre’ Gilbert and wife Cierra, Makayla Lambert, Skye Martinez, Kiara Umana, Taryn Lambert, Les Mead, Jeremiah Martinez, Jayden Mead, Teigan Maddex, Bailey Mead, Bentley Gilbert, Braylon Maddex, Isabella Umana and Taelynn Boughton; special relatives, Rob and Liese Mead; and special friends, Chet and Jayme Golden. The family would like to say a special thank you to Jackson County Memorial Hospital Hospice Care and Dr. Charles Carter. Family will be at the funeral home Friday, September 13, 2019, from 6:00 p.m. till 8:00 p.m. to greet friends. Funeral services are scheduled for 2:00 pm Saturday, September 14, 2019, at the Kincannon Funeral Home Chapel, with Brother John Lingle officiating. Burial will follow in the Altus City Cemetery.

The family of Leslie C. Lambert created this Life Tributes page to make it easy to share your memories.

Les Lambert of Altus, Oklahoma, passed away on September 11,...

Send flowers to the Lambert family.