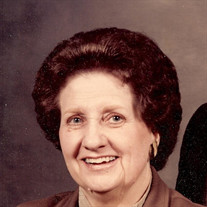 Lily Deen Runividge, 95, of Altus, Oklahoma passed away Saturday, February 15, 2020 in Plano, Texas. Her life will be celebrated with a Catholic Mass at 10:00am Saturday February 22, 2020 at the Prince Of Peace Catholic Church in Altus, Oklahoma. Father Joseph David will officiate the mass and burial. The burial service will be at the Hobart Rose Cemetery under the direction of Kincannon Funeral Home and Cremation Service. Her Rosery will be held Friday, February 21, 2020 at 6:30pm at the Kincannon Funeral Home. Lily Deen was born at home in Cooperton on September 21, 1924 to Oklahoma ranchers, Dan Louis Haley and Frances Ellen (Williams) Haley. She attended school in Indiahoma, Oklahoma and briefly in Fort Sumner, New Mexico before returning to Cooperton to graduate High School in 1942. For a short time, she attended The University of Oklahoma and married Clarence Nash, who bravely fought and died for our country during WWII. Later, Lily Deen moved to San Francisco where she worked in the financial district and met Joseph Louis Runividge at an ice cream shop while he was also serving in the Navy. They married on April 21, 1946 and moved to Waterbury, Connecticut to be near his family while returning to his former job. After a year, they decided to return to Oklahoma and start a family. Their daughter Sheryl Frances Runividge was born in 1948. They raised her on a ranch in the Wichita Mountains near Lily Deen’s family. When Shery was 13 years old, they moved to Altus, Oklahoma where Lily worked as an insurance underwriter. Lily Deen was active in the Catholic Church, the Garden Club while taking care of her family and their many animals at the ranch. She was known as being an excellent horseback rider and was a cowgirl in the truest sense. Lily Deen was also an accomplished pianist, excellent cook, lover of the arts, costume designer, debate champion and 3 state champion in baton twirling and an outstanding mother and grandmother. If you knew her you would know that she is of Irish descent and was noted for her Irish humor, sharp wit and attention to detail which made her social gatherings popular. Lily was preceded in death by her parents Dan and Frances Haley, her husband Joseph Runividge, her brother Jack Dan Haley, her sister Loretta Rae von Tungeln. She is survived by her daughter Shery Ellis and her husband John, granddaughters Meredith Ellis and Emily Ellis, and nephews Louis von Tungeln and Kevin von Tungeln and wife Sue as well as many cousins, their spouses and children; and last but not least her 2 devoted puppies, Corky and Rascal!

Lily Deen Runividge, 95, of Altus, Oklahoma passed away Saturday, February 15, 2020 in Plano, Texas. Her life will be celebrated with a Catholic Mass at 10:00am Saturday February 22, 2020 at the Prince Of Peace Catholic Church in Altus,... View Obituary & Service Information

The family of Lily Deen Runividge created this Life Tributes page to make it easy to share your memories.

Send flowers to the Runividge family.