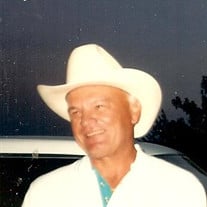 Lloyd Douglas "Doug" Winters, 75, Yukon, Oklahoma passed away Wednesday, July 11, 2018 at his home. Funeral services will be 2 p.m. Saturday, July 14, 2018 at Kincannon Funeral Home with Gary Adams officiating. Burial will follow services at the Altus City Cemetery under the direction of Kincannon Funeral Home and Cremation Service. Doug Winters was born March 10, 1943 in Hobart, Oklahoma to Lloyd M. and Mildred A. (Groves) Winters. He graduated from Lone Wolf High School, Lone Wolf, Oklahoma with the class of 1961. Doug continued his education at Southwestern State University in Weatherford, Oklahoma where he played football on scholarship. He worked most of his adult life in sales in the food service industry. Doug married Cynthia Ranae Ford November 24, 1994 in Vernon, Texas. He and Ranae were members of the First Baptist Church in Lawton, Oklahoma, he and Ranae were baptized together. Doug enjoyed hunting, fishing with his brothers and special friends, Oklahoma University football, sports and spending time with family and friends. Doug and Ranae had 23 adventurous years of marriage. They enjoyed traveling to new places as often as work and family obligations permitted. Doug was great bonus dad to CJ2, and loved playing with the twin grandchildren, Poppy and CJ3 and the grand-dogs, Abby and Mac. He was especially close to his father-in-law, Swede Steensgard, and looked forward to the visits with Swede and Ranae’s mother, Bonetta, during the holidays. Christmas gatherings were filled with laughter and pranks at the Steensgard home when Ranae’s sisters and their families brought tons of food and gifts to celebrate the season. Doug loved visiting with the “men” in the sun room, while the women prepared the feast and the kids played all over the house and yard. He was preceded in death by his parents and sister-in-law, Sherril Rae Ford. Doug is survived by his wife, Ranae, of the home in Yukon; a son, Clifford Jim McElroy, II and wife, Caitlin; two brothers, Lonnie Winters and wife, Donna; Randy Winters and wife, Vickie; grandchildren, Clifford Jim McElroy, III and Penelope Violet McElroy. Ranae’s sisters and their spouses, Margaret and John Bates, Brenda and Larry Andrew, Carolyn and Mark Perry, and Lori Anderson, and many friends, including Dick Coats and Rich and Renee Robinson, and numerous family members.

The family of Lloyd "Doug" Winters created this Life Tributes page to make it easy to share your memories.

Send flowers to the Winters family.