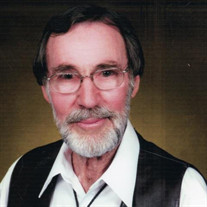 Lloyde E. “Buddy” Golden, 89, Altus, passed away at his home, Friday, February 4, 2022, with his family by his side. A Celebration of Life Memorial service will be held 2 p.m. Saturday, February 26, 2022, in the Kincannon Memorial Chapel with Associate Pastor Doug Altom officiating. Cremation and memorial services are under the direction of Kincannon Funeral Home and Cremation Service. Lloyde was born November 10, 1932 at home near Hollister, Oklahoma to Mack and Agnes (Mansel) Golden. He graduated from Laing High School, with the Class of 1950. He had attended Cameron College in Lawton, Oklahoma on a music scholarship prior to enlisting in the United States Air Force in 1953 and was stationed at Reese Air Force Base in Lubbock, Texas. He married Patsy Dunegan on November 7, 1953. He was honorably discharged from the Air Force in 1957, and the couple moved to El Dorado, Kansas, where Lloyde worked at the local Ford dealership while also running cattle on their 160-acre ranch. He then established his own used car business while in Kansas. Shortly afterwards, the family moved to Wichita Falls, Texas and Lloyde re-established his used car business and then on to Bowie, Texas, continuing in the business for an additional 21 years until his retirement in 2018, due to illness. After retirement, the couple then moved to Altus to be close to family. Lloyde was a member of the First Baptist Church in Altus; enjoyed playing the guitar, piano, flying, tinkering with cars, and spending time with his family, grandchildren, and great grandchildren. Lloyde was preceded in death by his parents, Mack and Agnes Golden; and twelve siblings. He is survived by his wife, Patti; sons, Chad Randall Golden and wife, Linda; and Chet Ray Golden and wife, Jayme; younger brother, Monte Golden and wife, Lilly; four grandchildren, Louie Golden, Cade Golden, Calen Golden, and Cierra Gilbert; ten great grandchildren, Charlie Golden, Carlee Golden, Ava Golden, Wyatt McConnell, Zialas Kooper, Cade Eugene Golden, Verity Golden, Kynzley Golden, Coy Gilbert, and Ava Gilbert; as well as many friends. Online tributes may be made at kincannonfuneralhome.com

The family of Lloyde E. "Buddy" Golden created this Life Tributes page to make it easy to share your memories.

Send flowers to the Golden family.