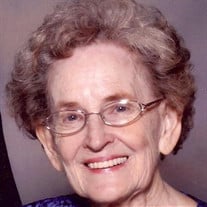 Lois Y. Brazell, 86, Altus, passed away on Sunday, October 7, 2018 in Oklahoma City. Funeral services have been scheduled for 2:00 PM, Thursday, October 11, 2018 at the First Baptist Church with Dr. Jeff Moore officiating. Burial will follow in the Altus City Cemetery under the direction of Kincannon Funeral Home and Cremation Service. Lois Ynona Neal was born on January 10, 1932 to Charley Pratt and Tessie Mae (Tillery) Neal in Mountain View, Oklahoma. She attended and graduated from Warren High School in 1950. Lois and James Brazell were united in marriage on March 2, 1950 and to this union three sons were born. Lois was a national sales director for Sarah Coventry. Later, she worked for TG&Y as a department manager and then for Wal-Mart as a department manager until she retired in 1994. She was a member of the First Baptist Church in Altus and enjoyed cake decorating, making floral arrangements, making ceramics and going to garage sales. Most of all, she loved her family and enjoyed time spent with them. Lois is preceded in death by her parents, her husband, James, in August 2018, a son, James Neal Brazell; a brother, Junior Pratt Neal; two daughters-in-law, Marci Jan Brazell and Cathy Ball Brazell. She leaves behind to cherish her memories two sons, Randy Brazell; Jeff Brazell and wife, Sema; seven grandchildren, Helen Marie Brazell, Amber Schacter, Amanda Smith, James Dale Brazell, Quinton Brazell, Jessica Brazell and Marli Brazell; and a sister, Patsy Rivera and husband, Oscar. The Brazell family will greet friends Wednesday, October 10, 2018 from 5:00 to 7:00 PM at the Kincannon Gathering Room. Online tributes may be made at kincannonfuneralhome.com

The family of Lois Ynona Brazell created this Life Tributes page to make it easy to share your memories.

Send flowers to the Brazell family.