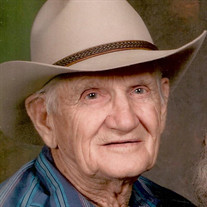 Loney Albert Arter, Sr., 93, went to be with the Lord on Tuesday, November 17, 2020. Graveside services have been scheduled for 2:00 PM, Monday, November 23, 2020 in the Eldorado Cemetery with Rev. Pete Wylie officiating. Services are under the direction of Kincannon Funeral Home and Cremation Services. Loney was born September 29, 1927 to Floyd Albert and Franky Gertrude (Jones) Arter in Grandfield, Oklahoma. On January 24, 1946, Loney enlisted in the United States Army as a Chaplain and served until March 21, 1947 when he was Honorably Discharged as a Technician Fifth Grade. After serving in the military Loney returned to Oklahoma and found the love of his life, Virginia Mae Weldon. Loney and Virginia were united in marriage July 8, 1947 in Burkburnett, Texas. After a few years, Loney moved his family to Littlefield, Texas where he worked for the Highway Department. Several years later the family moved to Manitou, Oklahoma where they lived until 1968. Loney moved his family to Eldorado, Oklahoma where he was employed as the custodian of the Eldorado School. Eldorado became home for many years for Loney, his wife and ten children. After Loney left the school he became self employed as a jack of all trades. He became the towns carpenter, plumber, electrician, roofer and anything else the town needed him to do. Loney enjoyed doing upholstery, working in his greenhouse, fishing and after retiring he enjoyed making quilts for his family and friends. Loney is preceded in death by his parents, Floyd and Gertrude; his wife, Virginia; five brothers, Herbert, Edgar, Dave, Jackie and Bobby Arter; son-in-law, Lee Snider; grandson, Devin Kyle Arter; granddaughter, Sherrie Lynn Branum; and three great grandchildren, Hunter Wayne Waldo, Veronica Maples and Cutter Emmons. Loney leaves behind four sons, David and wife, Jean, Joseph and wife, Jan, Loney, Jr. “Butch” and wife, Debbie, and Kenneth Arter; six daughters, Wanda and husband, Jerry Hamersley, Joye Mae and husband, Bill McDonald, Shirley and husband, Keith Maples, Connie Snider, Carla and husband, Ken Maples, and Teena and husband, David Emmons; and numerous grandchildren, great grandchildren and great great grandchildren. He is also survived by two sisters, Phylis and husband, Norman Barron, and Carolyn and husband, Paul Kramp. Mr. Arter will lie in state at the Kincannon Funeral Chapel in Eldorado. Online tributes may be made at kincannonfuneralhome.com

Loney Albert Arter, Sr., 93, went to be with the Lord on Tuesday, November 17, 2020. Graveside services have been scheduled for 2:00 PM, Monday, November 23, 2020 in the Eldorado Cemetery with Rev. Pete Wylie officiating. Services are under... View Obituary & Service Information

The family of Loney Albert Arter, Sr. created this Life Tributes page to make it easy to share your memories.

Send flowers to the Arter, family.