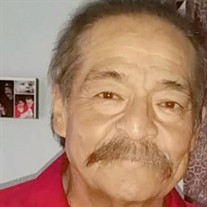 Lorenzo Perez, 69, Olustee, Oklahoma, passed away on Monday, January 31, 2022 in Olustee. Funeral services will be 2:00 PM Saturday, February 5, 2022 at the Kincannon Memorial Chapel with Pastors Richard Reyes and Ruben Ybarra officiating. Burial will follow in the Olustee Cemetery under the direction of the Kincannon Funeral Home and Cremation Service. Lorenzo was born on October 3, 1952 in Big Wells, Texas to Bridgida Maldonado. They later moved to Olustee, Oklahoma where he graduated in 1971. Lorenzo married Mary Ann Valverde on August 22, 1973 in Vernon, Texas and they made their home in Olustee. Lorenzo’s love for God and music had him involved in different Christian bands where he wrote most of his own music and later recorded some of his own songs. While traveling, he preached the word of God and would encourage everyone to move forward in their journey with Christ. He worked for the Olustee Cotton gin and the Altus Cotton compress in which he retired from after 20 years of employment. Lorenzo attended several churches. He enjoyed fishing, softball, and spending time with his family but loved spending most of his time with grandchildren. Lorenzo was preceded in death by his parents; a son, Daniel Pérez; three grandchildren, Brandon Pérez, Chloe Elmore, and Kalan Elmore; four siblings, Celia Reyes, Richard Pérez, Dolores Sanchez, and Lupe Briones; brother-in-law, Refugio Garcia; and Godson, Deon Poolaw. Survivors include his wife of 48 years, Mary Ann Pérez; three daughters, Criscinda Pérez, Janelle Pérez, and Cassidy Pérez; twelve grandchildren, Felicity Pérez, Tristan Corker, Anbrya Corker, Evan Pérez, Jaden Pérez, Danica Pérez, Trinity Castro and her husband, Ivan, Marcus Lopez, Athena Hunt, Dennis Cardell, III, Alexandria Moncada, and Nicholas Wright; five great grandchildren, Kai Castro, Bryan Vincent, III, Blakelynn Vincent, Ava Vincent, and Mercy Cantu; a sister, Mary Garcia; a brother, Roberto Mesa and his wife, Cherry; brother in law, Armando Reyes; and several nieces and nephews and a host friends. Online tributes may be made at kincannonfuneralhome.com

The family of Lorenzo Perez created this Life Tributes page to make it easy to share your memories.

Send flowers to the Perez family.