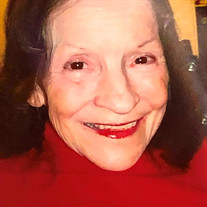 Louise (Adams) Keck, 73, Altus, passed away after an illness on Friday, December 28, 2018 at the English Village Manor. A graveside memorial service will be held at 10:00 AM Monday, January 7, 2019 at the Francis Cemetery with Dr. Jeff Moore officiating. Arrangements are under the care of the Kincannon Funeral Home and Cremation Service. Louise Adams Keck was born on December 2, 1945 to Louis and Bessie (Tallock) Keck in Stillwater, Oklahoma. Louise was one of 14 children growing up in the community of Stillwater, Oklahoma. As a young child growing up in Oklahoma, Louise enjoyed working the fields with her father and helping her mother with household chores. Louise was 1 of 14 children, so helping was necessary when growing up. When Louise was around 10, she began helping at a family members café cleaning and serving food. She was also hired by families in the community to clean and babysit. Louise married but always stayed close to her family roots Ms. Louise Keck grew up in the “The Primitive Baptist Church” always attending with her sisters or friends. Louise accepted Jesus into her heart and life when she was 9 years old. Growing up, she was active in her church and could recite gospel lyrics at any time. God and her faith were a big part of Louise’s life. In 1974, Louise and her family moved to Altus. At this time, she and her children joined Altus First Baptist. As a mother with children in school, Louise always volunteered for numerous school activities. While in Altus, she helped at many activities at their elementary schools and volunteered as a troop leader for Sunset Elementary Brownie Troup. For a short-time Louise lived with family members in and around the Stillwater area until coming back to Altus after becoming severely ill. Louise is preceded in death by her parents and she is the last of 14 children to pass away. Louise also has a daughter, Theresa Lynn Alexander Rinker, and granddaughter, Heather Dawn Bryce, waiting for her in heaven. Louise is survived by her children: Patricia and Gene Bryce, Altus, OK, Chuck and Cora Alexander, Jennings, OK, Jackson Alexander, Blanchard, OK, Amanda and Detreck Morrell, Coppell, TX, Hope Romines of Portsmouth, OH, Dennis Swarthout of Blanchard, OK; grandchildren, Gene David Bryce, Altus, OK, Kelly and spouse, Jarod Johns, Odessa, TX, Cassie Morrell and Rawlins Morrell, Coppell, TX, Oakly Romine, Kendal Romine and McKayla Romine, Moore, OK, Brandon Alexander, Blanchard, OK; great grandchildren, Sawyer James Bryce and Sutton Paige Bryce, Altus, OK, and Eli Rhett Johns, Odessa, TX. Online tributes may be made at kincannonfuneralhome.com

Louise (Adams) Keck, 73, Altus, passed away after an illness on Friday, December 28, 2018 at the English Village Manor. A graveside memorial service will be held at 10:00 AM Monday, January 7, 2019 at the Francis Cemetery with Dr. Jeff Moore... View Obituary & Service Information

The family of Louise (Adams) Keck created this Life Tributes page to make it easy to share your memories.

Send flowers to the Keck family.