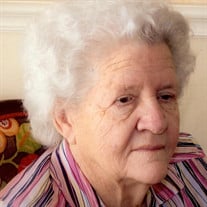 Louise Southern Lemaster, Altus, passed away at Plantation Assisted Living, Friday, October 12, 2018. Memorial services have been scheduled for 2:00 PM, Wednesday, October 17, 2018 at the Kincannon Memorial Chapel. Services have been entrusted to Kincannon Funeral Home and Cremation Service. Louise Southern was born December 19, 1928 to Daniel W. and Leona (Peebles) Southern in Altus, Oklahoma. She graduated from Ozark High School in 1947, she then attended the University of Oklahoma and received her Bachelor's Degree in 1951. After graduation she taught one year at Weaver School, south of Tipton, OK. Louise and Ellis Lemaster were united in marriage on July 19, 1951 in Altus, Oklahoma and to this union five children were born. She worked in the family auction business for many years. Louise enjoyed playing Scrabble, dominoes and working cross word puzzles. Her greatest joy was her children, grandchildren and family. Louise is preceded in death by her parents; husband, Ellis Lemaster; son, Kenneth Lemaster; great granddaughter, Victoria Davis; and three brothers, Ray, Eugene and Dee Southern. She is survived by her two daughters, Brenda Henry and husband, Bobby; and Debra McCallay; two sons Don Lemaster and wife, Ronda; Anthony Lemaster and wife, Sandy; daughter - in - law Sara Lemaster; eleven grandchildren, and nine great-grandchildren. She also leaves a sister, Ella Ruth Thornton and husband, Billy G; and sister-in-law, Bernice Southern. Louise Lemaster's wish was to will her body to research. Memorial contributions may be made to the OU willed body program, PO Box 26901, BSEB 100, OKC, OK 73190. Family and friends unable to attend may log on to kincannonfuneralhome.com, 30 minutes prior to the service, to view the live webcast of the funeral. Online tributes may be made at kincannonfuneralhome.com

The family of Louise Southern Lemaster created this Life Tributes page to make it easy to share your memories.

Send flowers to the Lemaster family.