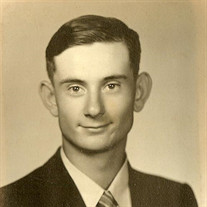 Loyd A. Gilliam, 85, Altus, passed away Sunday morning at his home. Graveside services, with U.S. Army Honor Guard, will be 2 p.m. Wednesday, November 6, 2019 in the Altus City Cemetery Veteran's Section with VFW Altus 4876 Post Commander / VFW State Chaplain Joe Roman officiating under the direction of Kincannon Funeral Home and Cremation Service. Loyd Arthur Gilliam was born August 14, 1934 in Gould, Oklahoma to W. "Billie" and M. Catherine (Dudley) Gilliam. He graduated from Ron High School with the Class of 1952. Mr. Gilliam enlisted in the U.S. Army in December of 1955 and was honorably discharged as a PFC in November of 1957. He then served two years, 1957 to 1959, in the U.S. Army Active Reserves. Loyd married Betty J. Pierce on January 19, 1965 in Altus, Oklahoma. He then began working for the City of Altus in September of 1969 and retired in August of 1995 as the City of Altus Garage Supervisor. Loyd was of the Baptist Faith and enjoyed hunting and fishing and the outdoors. Loyd was preceded in death by his parents; his wife, Betty; six brothers, Earl, Bert, Raymond, Tommy, Wayne and George; three sisters, Lucy, Jane and Doris. He is survived by two sisters, Mertie Van Dyne of Edmond, OK; and Nettie Humphery and husband, Jimmy of Hinton, OK; special friends, Jolene Tellgren and husband, Jim, and their daughter, Jenna; Debbie Hurd and husband, Larry; and Dennis Ratzlaff; a special nephew, Kevin Gilliam; and a host of nieces, nephews, cousins, other relatives and many friends. The Gilliam family will greet friends from 6 to 7 p.m. Tuesday evening at Kincannon Funeral Home.

The family of Loyd A. Gilliam created this Life Tributes page to make it easy to share your memories.

Loyd A. Gilliam, 85, Altus, passed away Sunday morning at his...

Send flowers to the Gilliam family.