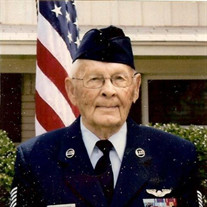 Manford “Swede” Steensgard, 92, Altus, passed away Tuesday, October 27, 2020 at his home with his family by his side. Funeral services will be 2 p.m. Friday, October 30, 2020 at the Kincannon Chapel with Rev. Doug Altom officiating. Burial will follow at the Altus City Cemetery under the direction of Kincannon Funeral Home and Cremation Service. Manford Irvin Steensgard was born August 25, 1928 in Canton, Minnesota to Alvin and Luella (Peterson) Steensgard. Swede graduated Canton High School with the Class of 1946 and enlisted in the United States Air Force in January of 1948. While in the USAF, Swede was awarded the Strategic Air Command Master Crew Chief Award, the 2nd Air Force Master Crew Chief Award, and the National Defense Medal, Vietnam. He was an aircraft mechanic in his civil service career. Swede retired as a Tech Sergeant from Altus Air Force Base in February of 1968. Following his military and civil services careers, he worked at WOSC as a security guard and later worked for the City of Altus in Parks and Recreation. He married Bonetta (Brady) Ford on April 27, 1981. Along with Bonetta came six daughters and an abundance of grandchildren and great grandchildren. Swede was a member of the First Baptist Church, the VFW and the American Legion. He enjoyed playing cards, dancing, traveling, spending time with his family and attending as many of his grandchildren’s activities as possible. He was preceded in death by his parents; his sister, LuVonne Rittmann; his twin brother, Maynard I. Steensgard; son-in-law, Doug Winters and his daughter, Sherril Ford Dawson. Swede is survived by his wife, Bonetta; five daughters, Margaret Bates and husband, John; Brenda Andrew and husband, Larry; Carolyn Perry and husband, Mark; Ranae Winters; and Lori Ford Anderson; thirteen grandchildren, 20 great grandchildren and many friends. Memorial contributions may be made to the JCMH Hospice @580-379-6900. TO VIEW THE MEMORIAL VIDEO, PLEASE CLICK ON THE LINK BELOW! https://www.tributeslides.com/tributes/show/LTF9TDWQN7XCHQ2F

The family of Manford Irvin "Swede" Steensgard created this Life Tributes page to make it easy to share your memories.

Send flowers to the Steensgard family.