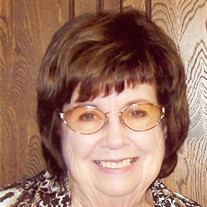 Margaret A. Sherwood, 83, passed away quietly on May 14, 2019 at Jackson County Memorial Hospital with her sons Daniel and David at her side. Graveside services will be 1:30 p.m. Tuesday, May 21, 2019 at the Altus City Cemetery under the direction of Kincannon Funeral Home and Cremation Service. Margaret Ann Perry was born July 21, 1935 in Kilgore, Texas to W.L. and Lillie (Coy) Perry. Margaret was the oldest of five children. In 1942 the family moved from Kilgore to Lone Wolf, Oklahoma where Margaret began first grade. She attended the Lone Wolf school until her sophomore year when, in 1951, her family moved to Altus. While attending Altus High School Margaret had to drop out in order to take care of her siblings while her parents worked. She later finished high school and continued her education at Altus Jr. College and W.O.S.C., receiving an Associate of Arts Degree. Margaret married Melvin Sherwood in 1957, shortly after he was discharged by the Navy. He worked for the City of Altus and was the City Electrical Superintendent for 39 years, retiring in 1994. Margaret and Melvin had twin sons, Daniel and David. Daniel and his wife, Lisa, live in Durant, Oklahoma. Both have been teachers for many years and Daniel has recently retired. They have two children, Terran and Chelsea. Terran is a radio personality and video production manager for KLBC in Durant. Chelsea is working in early childhood development. She is looking forward to a career in the Education Field. Both graduated from Southeastern Oklahoma State University in Durant. David was a Corrections officer until he was injured on the job and retired. David lives in Altus. He has been a faithful caregiver to Melvin and Margaret. They often expressed their gratitude to David's effort in attending their needs. Margaret worked in sales at JC Penney's and at Watkins most of her working years. She had performed volunteer work at the hospital and was active in several clubs. Margaret attended the First Assembly of God Church in Altus for over 58 years. She had taught Sunday School, sang in the choir and had been part of the activities of church work. She was a strong financial supporter of missions work, orphans and contributing to the support of aged ministers. She read her Bible every night (until her eyesight and health began to fail her) - sometimes for hours - sometimes up until daylight. She has a number of old bibles that have been worn out, with pages falling out from such use. Margaret loved animals of all kinds but none were more precious to her than dogs. Over the years she had approximately 17 small dogs, sometimes 3 and 4 at a time - most of them rescued from the animal shelter. They all lived out happy well cared for lives once they came to Margaret. Margaret was preceded in death by her father, W.L. "Leon" Perry and mother, Lillie (Coy) Perry; a sister, Alice Reopelle and husband, Bob; a brother, Curtis Perry and his former wife, Laura; and Margaret's husband for approximately 54 years, Melvin. Margaret is survived by her son, Daniel Sherwood and his wife, Lisa, of Durant, OK; her son, David Sherwood of Altus, OK; a sister, Frances (Perry) Wells and her husband, Ralph, of Monticello, AR; a brother, Larry Perry and his wife, Deanna, of Tahlequah, OK; a grandson, Terran Sherwood of Durant, OK; a granddaughter, Chelsea Sherwood of Durant, OK; along with many dearly loved nieces and nephews. Online tributes may be made at kincannonfuneralhome.com

Margaret A. Sherwood, 83, passed away quietly on May 14, 2019 at Jackson County Memorial Hospital with her sons Daniel and David at her side. Graveside services will be 1:30 p.m. Tuesday, May 21, 2019 at the Altus City Cemetery under the direction... View Obituary & Service Information

The family of Margaret Ann Sherwood created this Life Tributes page to make it easy to share your memories.

Send flowers to the Sherwood family.