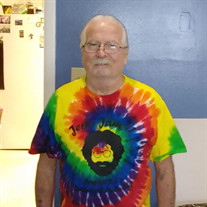 Mark E. Gagnon, 68, Altus, passed away at his home Thursday, January 20, 2022. The family has chosen cremation and there will be a private family memorial in Medford, New York at a later date. Services are under the direction of Kincannon Funeral Home and Cremation Services. Mark was born on August 26, 1953 in Port Jefferson, New York to John and Ruth (Avery) Gagnon. He graduated from Longwood High School with the Class of 1971 in Middle Island, New York. Mark was a carpet layer by trade and married Margaret Simonson on March 29, 1986 in Patchogue, New York. He also did some machine work; enjoyed fishing; was an avid reader; and loved beading crafts. Mark’s favorite attire was his extensive collection of tie dye t-shirts and his all- time favorite band was the Grateful Dead as he was truly a “Dead Head.” He loved to work with his hands while spending time with his brother Glenn in the workshop as they spent hours talking about everything under the sun. Mark was always ready to enjoy a good meal with Glenn and sister-in-law Donna, who loved to feed him. He submersed himself in a good book and appreciated nature during his countryside rides. Mark is preceded in death by his brother, John Gagnon, Jr; brother-in-law, Joe Yonelunas; and grandparents, the Averys and the Gagnons. He is survived by his parents; his wife, Margaret; sons, Mark, Jr. and Tyler; his much-loved grandson, Chase; brothers, Glenn Gagnon (Donna), Peter Gagnon (Barbara), and Paul Gagnon (Donna); sisters, Ruthanne Yonelunas, Dianne DeSivo (fiancé, Mark Fehner), Yvonne Mudaro (Frank); many precious nieces and nephews, other family members and a host of friends. Online tributes may be made at kincannonfuneralhome.com

Mark E. Gagnon, 68, Altus, passed away at his home Thursday, January 20, 2022. The family has chosen cremation and there will be a private family memorial in Medford, New York at a later date. Services are under the direction of Kincannon... View Obituary & Service Information

The family of Mark Elliot Gagnon created this Life Tributes page to make it easy to share your memories.

Send flowers to the Gagnon family.