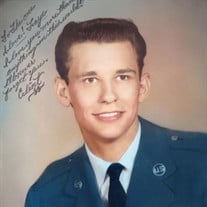 Marshall Clinton “Clint” Dill, 77, of Springer, Oklahoma, passed away on Tuesday, March 1, 2022 at his home. Funeral services will be at 10:00 AM on Monday March 7, 2022 at the Kincannon Memorial Chapel with Mr. Charlie Davis officiating and the Patriot Guard Riders in attendance. Burial with military honors will follow in the Altus City Cemetery under the direction of the Kincannon Funeral Home and Cremation Service. Clint was born on August 25, 1944 in Muskegon, Michigan to George Marshall and Marah (Berghis) Dill. He faithfully served in the United States Air Force for four years. While in the service Clint served in Vietnam and was honorably discharged as a Sergeant. Clint married Etta “Faye” Ballard in Vernon, Texas on July 2, 1966. When he was discharged from the military, he spent the rest of his career as a machinist in the aircraft business. He was also an inspector for aircraft at Menasco Manufacturing. He later worked at Bell Helicopter where he retired in 2008. Upon retirement he and Faye moved to Springer, Oklahoma to a beautiful home in the country. Clint was a member of the Church of Christ. He enjoyed hunting, fishing, gardening and piddling. He loved being outdoors. His parents, George and Marah Dill, preceded him in death. Survivors include his wife, Faye, of the home; daughter, Andrea Trout and husband, Bill of Hurst Texas; sons, David Dill and wife, Michelle of Bedford, Texas, and Brian Dill and wife, Kim of Bridgeport, Texas; grandchildren, Brittany Kosumsuriya and husband, Patrick, Lindsey Mathews and husband, Chad, Zachary Trout, Ashlyn Ravelo and husband, Aeron, and Jordyn Smith; great grandchildren, Will Kosumsuriya and Stetson Mathews; sister, Almarie Taylor; and many other family members and friends. Visitation for Clint will begin at 1:00 PM on Sunday, March 6th. The family will receive friends at the funeral home from 2:00 – 3:30 PM. In lieu of flowers, memorial contributions may be made in Clint’s name to the Good Shepherd Hospice, 1505 N Commerce St, Ste 204, Ardmore, OK 73401. Online tributes may be made at kincannonfuneralhome.com

The family of Marshall Clinton Dill created this Life Tributes page to make it easy to share your memories.

Send flowers to the Dill family.