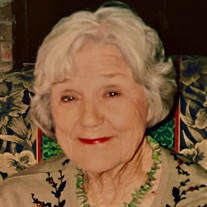 Mattie Dean (Morgan) Cox peacefully passed away on January 2, 2022 in Altus, OK at the age of 98 years. Born to Albert L. and Missie (Bilbrey) Morgan in Bonita, Texas on December 31, 1923, Dean grew up in rural Montague County, TX as the youngest of seven children, all of whom have preceded her in death. Prior to marriage, Dean received a 2-year degree at Cooke County College in Gainesville, TX. Later, she worked for Texas A&M in College Station, TX from approximately 1949-50. Dean married Charles Emmett Cox, Jr. (deceased 2003) in Montague County, TX on May 27, 1943. Dean and Charles moved immediately to La Jolla, CA where Charles was stationed nearby in the U.S. Army. Eventually, Dean and Charles moved back to Texas where Charles finished his degree at Texas A&M. In their earlier Texas years, they moved to multiple Texas cities (El Paso, Abilene, Dallas, Austin) before finally settling in Altus, OK in 1959. Dean’s immediate family grew up “on the water” at Lake Altus, where Dean water skied well into her early 60’s. Dean’s cabin was always open to anyone who showed up. Well into her 90’s, she still enjoyed driving up to sit on her Hicks Mountain cabin’s back deck. After retirement, Dean joined Charles in his love for golf, and she quickly developed the same passion for it. Whether at the lake, or at the golf course, it was who she was with that mattered more to her than the activity itself. Throughout their later years, she and Charles cherished their relationships with the “Hot Springs Bunch” and their families. Dean enjoyed playing bridge and dominoes with her friends, which she actively maintained until the Covid-19 events of 2020. She was also an avid sports fan, placing highest priority on the OKC Thunder basketball team, followed by Oklahoma State University Cowboys football. She was a constant season ticket holder with the Altus Bulldogs, where she could be seen in the bleachers well into her 90’s. Throughout her long life, Dean’s top priority was serving God, loving Jesus, and demonstrating Christian principles in her daily life. She was a member of the First Baptist Church in Altus, OK for 62 years, where she served others in whatever role she could possibly find. She was an active member of her cherished Abigail Sunday School Class. Leading by example, Dean leaves a legacy to her children, demonstrating constant love and selflessness. Her favorite portion of The Holy Bible was the 23rd Psalms. Simply put, Dean was a true woman of God, throughout her entire life. Dean is survived by her three (3) children; Danney Cox (wife Marsha) of Prescott, AZ, Lynn Hyde of Altus, OK, and Kelly Cox (wife Shelly) of Cypress, TX; grandchildren, Kelly Hyde (wife Nicole and their children Jayce and Kobe) of Blair, OK, and Kyle Cox of Tomball, TX. Services for Dean Cox will be held at First Baptist Church in Altus at 2:00 PM on Thursday, January 6, 2022. The family would like to thank Bernice Barela, Leticia Gomez, Angel Lewis, Sherry Maldonado, and Donna Shepherd for caring for and loving our Mother. A special thanks to Roberta Brady-Lee for the gift of prayer. A special thanks to Mary and Clark for their gift of music which Miss Dean loved. Thank you to Alex Rodriquez and the Black Orchid team for creating our mother’s flowers. We would also like to thank JCMH Home Health and Hospice for helping to take care of our mother. Online tributes may be made at kincannonfuneralhome.com

Mattie Dean (Morgan) Cox peacefully passed away on January 2, 2022 in Altus, OK at the age of 98 years. Born to Albert L. and Missie (Bilbrey) Morgan in Bonita, Texas on December 31, 1923, Dean grew up in rural Montague County, TX as the youngest... View Obituary & Service Information

The family of Mattie Dean Cox created this Life Tributes page to make it easy to share your memories.

Send flowers to the Cox family.