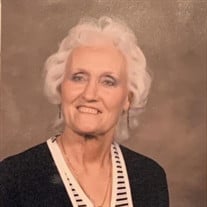 Melvena JoAnn Huddleston-Faulk, 82, Altus, passed away on Wednesday, December 2, 2020 at the English Village Manor. Funeral services will be 2:00 PM Saturday, December 5, 2020 at the Kincannon Memorial Chapel with Joel McCoy officiating. Burial will follow in the Victory Cemetery under the direction of the Kincannon Funeral Home and Cremation Service. Melvena JoAnn Bennight was born on September 26, 1938 in Friendship, Oklahoma to Marvin and Ida Josephine (Hals) Bennight. She grew up and graduated high school from Friendship. Melvena married Charles W. Huddleston on June 27, 1957, but later divorced in 1981. They resided in Friendship, then moved to Elmer, Oklahoma until 1966, when they moved to Altus, Oklahoma. She spent her life working as a caring mother and spouse. She completed Licensed Practical Nursing school and utilized those skills at the Jackson County Memorial Hospital. After an unfortunate injury that brought her career to an end, she filled her time spending precious moments with her children and grandchildren. Melvena was known to have quite the green thumb. She loved plants and operated her own greenhouse for several years. She enjoyed collecting dolls and Tom Clark gnomes, putting puzzles together and working on her fish ponds. One of her most fond pastimes was dancing the night away at the Senior Citizens Dances. Her parents, second husband, Russell Faulk, two brothers, Michael and James Bennight, and a son-in-law, Randy C. Yocham, preceded her in death. Survivors include her first husband, Charles Huddleston; four children, Melba Clopton, Charles M. Huddleston and wife, Rachelle, Kathy Anderson and husband, Craig, and Gayla Yocham; ten siblings, J.C. Bennight, Boyd Bennight and wife, Barbara, Pat Edwards, Darlene Wilson, Oscar Bennight and wife, Ina, Gladys Hand, Euletta Harrell, Beverly Tabb and husband, Robert, Marvin Bennight and wife, Carolyn, and Mark Bennight and wife, Annette; nine grandchildren; and numerous great grandchildren, nieces, nephews, cousins, other relatives and friends. Online tributes may be made at kincannonfuneralhome.com

The family of Melvena JoAnn Huddleston-Faulk created this Life Tributes page to make it easy to share your memories.

Send flowers to the Huddleston-Faulk family.