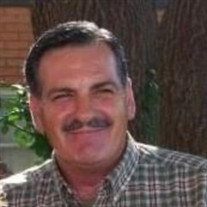 Michael A. “Mike” Cardenas, 69, formerly of Stockton, California, walked into his Father’s house on the 16th of September, 2021, at his home in Blair, Oklahoma. A memorial service will be scheduled at a later time. Cremation services are under the care of Kincannon Funeral Home and Cremation Services. Mike born on April 09, 1952, in San Jose, California to Joseph and Jenny (Hidalgo) Cardenas. Mike served as a Deacon for the former Christ’ Way Christian Church in Altus, Oklahoma. Mike was an avid fan of Indy Car racing and never missed a televised race. He loved spending time with his grandchildren and tinkering with his go-karts and mini-bikes. Mike married Judy A. Hall on January 17, 1999 in Atwater, California. Mike had two daughters, Michelle Cardenas-Foletta, Lisa Cardenas and two stepsons, Al Davis and Denny Davis. Mike worked several jobs in his lifetime including general handyman, convenience store manager, and as a Maytag repairman but trying to narrow Mike’s skills down to one thing would be a farce, he was a very talented and multifaceted individual. Mike was born a member of the Roman Catholic Church but later became a member of the Christian Church (Disciples of Christ) and loved sharing his faith by passing out pocket rosaries. Mike was preceded in death by his parents, Joseph and Jenny Cardenas. He is survived by his wife, Judy; his two daughters, Michelle Cardenas-Foletta and Lisa Cardenas; his two stepsons, Al Davis and wife, Sheila of Tipton, Oklahoma and Denny Davis and wife, Krysti of Blair, Oklahoma; seven grandchildren, KyLeigh, Anna, Dillon, Abby, Kathryn, Alee, and Alan; his brothers, Rick, Joe and John Cardenas; his sister Jenny Ravens Craft and husband, Byron; a niece, Erica; and two nephews, Rusty and Richie. Online tributes may be made at kincannonfuneralhome.com

Michael A. &#8220;Mike&#8221; Cardenas, 69, formerly of Stockton, California, walked into his Father&#8217;s house on the 16th of September, 2021, at his home in Blair, Oklahoma. A memorial service will be scheduled at a later time. Cremation... View Obituary & Service Information

The family of Michael Cardenas created this Life Tributes page to make it easy to share your memories.

Send flowers to the Cardenas family.