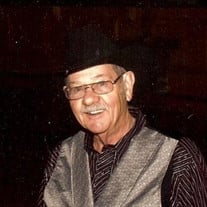 Milford Eugene “Gene” Stone, 85, passed away at his home in Blair on Thursday, September 10, 2020. Graveside services have been scheduled for 10:00 AM Tuesday, September 15, 2020 at the Blair Cemetery. Services are under the direction of Kincannon Funeral Home and Cremation Service. Gene was born on March 23, 1935 to Milford J. and Ruth Louise (Bell) Stone in Olustee, Oklahoma in the family home his father built. He graduated from Altus High School with the Class of 1953. He then joined the Oklahoma National Guard. Gene had a deep interest in motorcycles so he later moved to Amarillo, TX and operated a motorcycle shop. After returning to Altus, he worked for Republic Gypsum as a truck driver and dispatcher. Gene married Linda Luna on April 29, 1977 in Vernon, Texas. They operated Johnnie’s Steakhouse in Altus, OK in the early eighties and then a small café in Duke, OK. During his retirement years, Gene worked with his brother-in-law, James “J.D.” Davis, farming and ranching. Gene enjoyed hunting, fishing, camping, riding motorcycles and spending time with his family and friends. Gene is preceded in death by his parents; wife, Linda; and a sister, Frances Davis. He leaves behind two daughters, Kelly Preston and Shelly Breeze and husband, Greg; a son, Brent Stone and wife, Earlene; three grandchildren, Lindsey Osborne and husband, Heath, Brent “B.J.” Stone, Jr. and girlfriend, Sharronna, and Shealee Breeze; and two great-grandchildren, Kailyn Salcido and Kimber Osborne. He also leaves behind many friends. The Stone family will greet friends from 6:00 to 8:00 PM, Monday, September 14, 2020 at the Kincannon Funeral Home. Online tributes may be made at kincannonfuneralhome.com

The family of Milford Eugene "Gene" Stone created this Life Tributes page to make it easy to share your memories.

Milford Eugene “Gene” Stone, 85, passed away at his home in Blair...

Send flowers to the Stone family.