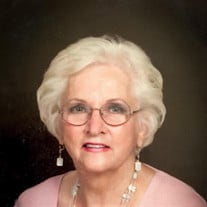 Nancy Carolyn (Howard) Chapman was the daughter of Lester & Letitia “Lettie” Howard of Olustee, Oklahoma. She was born the youngest of five children on January 16, 1933. She attended school in Olustee, Oklahoma until the time of her marriage to Orvel Kenneth Chapman of Elmer, Oklahoma in 1949. After her marriage, she transferred schools and finished her senior year in Elmer, Oklahoma. Carolyn’s greatest desire was to be a housewife and homemaker, which she did for many years until she became employed in the bookkeeping department at the National Bank of Commerce in Altus, Oklahoma. Carolyn Chapman was active in the New State Club, WSCS, served as MYF leader in the Methodist Church, volunteered for many school organizations, was a class parent, and directed the Children’s Church Choir in the Methodist Church. Carolyn was awarded the Golden Thimble Award from the State of Oklahoma. Those who were visitors to her home would have seen the many grand works of art in needlepoint and pedi point. In addition to needlepoint, she had many hobbies and interests, which included sewing, knitting, crocheting, furniture restoration, and interior design, as well as studying and traveling to historical locations. She always enjoyed cheering on the Oklahoma Thunder basketball team with her “Thunder-cheering” friends. Over the years, Kenneth & Carolyn restored every home they lived in, completing extensive remodeling and restoration of several homes. Carolyn was always active in her local church, serving in various capacities and leadership positions. Some of her most cherished times and memories were in her latter years with her church family and Life Group. She passed on a rich spiritual heritage to her children, grandchildren, and great-grandchildren. During their 66 years of marriage, Kenneth & Carolyn Chapman had four children, David Howard Chapman, Richard Kenneth “Dick” Chapman, Patrice (Chapman) Thompson, and Nancy Merris (Chapman) Dufresne. They have twelve grandchildren: Joshua Chapman, Taylor Chapman, Angela (Chapman) Rogers, Michelle (Chapman) Gallagher, Rebecca (Chapman) Snyder, Kathryn Chapman, Elizabeth (Chapman) Schettler, Amy (Thompson) Powell, Melissa (Thompson) Hotchkiss, Greyson Thompson, Stephen Dufresne, and Grant Dufresne. Carolyn has 24 great grandchildren. Carolyn Chapman is survived by one brother, Joseph Harvey Howard. She is proceeded in death by three siblings: Dick Howard, William Howard, and Emmalou (Howard) Bates. She is also proceeded in death by her husband, Orvel Kenneth Chapman, her son, Richard Kenneth “Dick” Chapman, and son-in-law, Ed Dufresne. Memorial contributions may be made to the Thrive Church Life Center Renovation Fund @ Thrive Church, P O Box 678, Altus, Oklahoma, 73522; 580-482-8150; or through the church center app: cometrhive.org TO VIEW THE MEMORIAL TRIBUTE, PLEASE CLICK ON THE LINK BELOW! https://www.tributeslides.com/tributes/show/6CK587ZLWLPLQBTY

Nancy Carolyn (Howard) Chapman was the daughter of Lester & Letitia &#8220;Lettie&#8221; Howard of Olustee, Oklahoma. She was born the youngest of five children on January 16, 1933. She attended school in Olustee, Oklahoma until... View Obituary & Service Information

The family of Nancy Carolyn Chapman created this Life Tributes page to make it easy to share your memories.

Send flowers to the Chapman family.