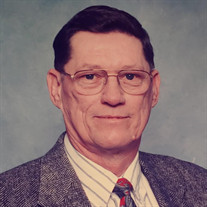 Neville Thomas “Tom” Brooks, 81, Altus, went home to be with the Lord on Wednesday, November 17, 2021. Funeral services will be 2:00 PM Monday, November 22, 2021 at the Centennial Memorial at Altus City Cemetery with Rev. Jason Duree officiating. Burial will be in the Altus City Cemetery under the direction of the Kincannon Funeral Home and Cremation Service. Neville T. Brooks was born on April 14, 1940 in Houston, Texas to Rev. Harvey and Zelfa Brooks. He lived in Kansas City, Kansas and Elkhart, Indiana, where he graduated from high school in 1959. Tom joined the United States Air Force in June of 1960 and served at several stations in the United States and around the world during his 24-year career, before retiring on July 1, 1984. He met Synda Lea Heltzel of Kokomo, Indiana while stationed at Bunker Hill Air Force Base, Indiana and the two were married on November 22, 1963. Synda traveled with him and supported him not only during his military career but the for the rest of his life. After leaving the Air Force, Tom was employed by the City of Altus as the Sign Maintenance Supervisor. He also owned Tom’s Signs and later worked at Altus Air Force Base in the frame shop. In 1994, Tom accepted Christ as his Lord and Savior and served Him through his service at Southside Baptist Church as a deacon, Sunday School director, chairman for the Men’s Brotherhood and numerous other jobs and appointments within the congregation, including filling the pulpit as the need arose. Tom also served his Lord through service with the Gideon’s International where he was a Camp Chaplain. He was preceded in death by his parents; three brothers, John, William, and Danny Brooks; and two sisters, Nancy Maguire O’Brian Rohr and Betty Robinson Mize. Survivors include his wife, Synda, children, Diana Carter and husband, David, Dawn Kominski and husband, Chuck, and Tommy Brooks and wife, Christine; seven grandchildren, Jarrid and Bailey Snyder, Taye Carter, Charles and Harrison Kominski, and Dylan and Parker Brooks; and one great grandchild, Ozzy Snyder: a sister, Nyla Moore and husband, Richard; a brother, Robert Brooks and wife, Betty Jean; and numerous other family members and friends. The family will receive friends from 3:00 – 5:00 PM Sunday, November 21, 2021 at the funeral home. Online tributes may be made at kincannonfuneralhome.com

The family of Neville Thomas "Tom" Brooks created this Life Tributes page to make it easy to share your memories.

Send flowers to the Brooks family.