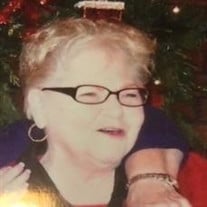 Noreta Kay Chambers, 79, Norman, Oklahoma passed away Wednesday, April 17, 2019 in Altus. A Celebration of Life will be 2 p.m. Tuesday, April 23, 2019 at Kincannon Funeral Home with Rev. Ricky Crouch officiating. A private family inurnment of cremated remains will take place at a later date. Cremation and memorial services are under the direction of Kincannon Funeral Home and Cremation Service. Noreta Kay Stone was born September 18, 1939 in Altus, Oklahoma to Victor and Bea (Hicks) Stone. She attended Altus Public Schools and began a career in hairdressing at the age of 17. Noreta married Willie Robert "Bud" Chambers in January of 1962 in Altus, Oklahoma. To this union, four children were born. She worked at Park Lane Beauty Salon for several years before buying it. She later worked for Century 7 Salon before her retirement in 2013, following 57 years of hairdressing and telling stories with her friends and bragging about her grandkids to her clients. Noreta was of the Baptist faith; loved spending time with her grandchildren; enjoyed scrapbooking and crafting. Noreta is preceded in death by her parents, Victor and Bea Stone, and her son, Victor Chambers. She is survived by her daughter, LaDana Jones and husband, Chris; two sons, Robert Chambers and wife, Karen; and Shannon Chambers; her sister, Darlene Cox and husband, James - both of whom were referred to "Sister Darlene" and "Brother James"; four grandchildren, Chloe and Reece Jones, and Jakob and Jordan Chambers; niece, Vicki McIntyre and husband, Don; nephew, Jimmy Cox and wife, Rhonda, their children; and many cousins and friends. Family and friends unable to attend may log on to kincannonfuneralhome.com, 30 minutes prior to the service, to view the live webcast of the funeral. Online tributes may be made at kincannonfuneralhome.com

The family of Noreta Kay Chambers created this Life Tributes page to make it easy to share your memories.

Send flowers to the Chambers family.