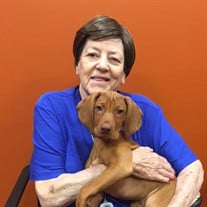 Norma Ruth Lyons, 82, formerly of Altus, passed away Saturday, September 8, 2018 in Springhill, Tennessee. Graveside services will be 10 a.m. Wednesday, September 12, 2018 at the Altus City Cemetery with Rev. Doug Altom officiating. Services are under the direction of Kincannon Funeral Home and Cremation Service. Norma Ruth Howard was born October 17, 1935 in Altus, Oklahoma to Will A. "Buster" and Alma Ruth (Rutledge) Howard. She graduated with the Altus High School Class of 1953, the same year she began working at Altus Air Force Base Civil Service. Norma continued her education at Altus Junior College and attained her Associate of Arts Degree in business. She married James Edwin "Jim" Lyons September 24, 1961 in Altus, Oklahoma. Norma retired her civil service job in 2000 following 47 years of service. She was a member of the Altus First Baptist Church; enjoyed shopping, bowling, Altus High School football, OSU football, Dallas Cowboys football and spending time with family and friends. Norma was preceded in death by her parents, Buster and Alma Ruth Howard; and her husband, Jim Lyons. She is survived by her daughter, Teki Lyons and partner, Teresa Ledbetter; several cousins; a dear friend, Helen Hilber, special caregivers, Debbie Wright and tiffany Battle; and many other friends. Memorial contributions may be made to the American Diabetes Association or the charity of your choice. The Lyons family will greet friends Tuesday evening from 6 p.m. to 8 p.m. at Kincannon Funeral Home. Online tributes may be made at kincannonfuneralhome.com

The family of Norma Ruth Lyons created this Life Tributes page to make it easy to share your memories.

Send flowers to the Lyons family.