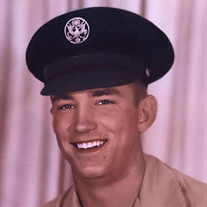 Norman Gray Smith, 63, Altus, passed away on Tuesday, November 12, 2019 at the Lawton/Fort Sill Veterans Center in Lawton, Oklahoma. Funeral services will be 10:00 AM Monday, November 18, 2019 at the Kincannon Memorial Chapel with Rev. Richard Ainslie officiating. Burial will be at 2:00 PM at the Fort Sill National Cemetery, Elgin, under the direction of the Kincannon Funeral Home and Cremation Service. Norman was born on November 21, 1955 in San Antonio, Texas to Billie and Charlotte (Barkley) Smith. He joined the United States Air Force on May 14, 1974. Norman married Susan Rich in Portland, Oregon on April 5, 1975. He served as an aircraft mechanic and retired as a Master Sergeant on May 31, 1996. Norman then worked for civil service at Altus Air Force Base and was a part of the "A Team." He was a lifetime member of the Altus VFW Post #4876. He was a fan of NASCAR and enjoyed traveling to attend many races across the country. Norman also enjoyed watching football, flying model airplanes, hunting deer and elk, as well as spending time with his five grandchildren and his dog, Gordy. Survivors include his wife, Susan, of the home; father, Billie Smith; two daughters, Michelle Garrison and husband, David, and Christina Esquivel; five grandchildren, Nathan and Jacob Garrison, and Caileigh, Miguel III, and Emily Rodriguez; a sister, Linda Higginbotham and husband, Kent; two brothers, Carey Smith and wife, Debbie, and Billy Smith and wife, Nicole; and a brother-in-law, Thomas Rich as well as many other family members and friends. He is preceded in death by his mother, Charlotte and his father-in-law and mother-in-law Delmar Rich and Jean House. The family will receive friends from 2:00 - 4:00 PM Sunday at the funeral home. Online tributes may be made at kincannonfuneralhome.com

The family of Norman Gray Smith created this Life Tributes page to make it easy to share your memories.

Send flowers to the Smith family.