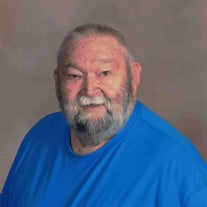 ATTENTION: Graveside Services will be at 2:30 PM on Tuesday, February 3, 2022 at Rock Cemetery. Otto Combs, Jr., known by everyone as Doodle, was born March 1, 1937 in Duke, Oklahoma to Otto Combs, Sr., and Minnie Ola (Houtchen) Combs. He passed away peacefully at his home, on January 28th, 2022 at the age of 84. Doodle attended Duke Public School and spent his youth working on local farms and learning the trade of being a mechanic. He married the love of his life, Melba Cooksey of Mangum, Oklahoma on June 16, 1957 at the Trinity Baptist Church in Mangum. They were married 64 years and together they raised six sons. Doodle spent countless hours watching his 6 boys play basketball and baseball. He was very proud of all their accomplishments. He was always willing to lend a hand to help them succeed. Doodle was truly a jack of all trades. There wasn’t anything he couldn’t do; from farming, raising livestock, flying a plane, preaching, fishing, scraping, traveling, hunting, butchering, gardening, and being an amazing grandfather to his 14 grandchildren. His boys were always amazed at his ability to drive extremely long stretches without ever seeming to get tired and how much of a crack shot he was with a gun. His sons take after him in their ability to know how to get things done. Many special memories include all 8 of them piling into their car and heading to Oklahoma City to stay with Doodle’s brother J.B. or heading to Mesquite Texas to stay with his sister Edith. He was a dedicated student of the Bible and loved sharing his salvation with others. He was a very giving man and would literally give the shirt off his back to anyone in need. He genuinely loved people and felt he was doing God’s work by ministering to others wherever and whenever the opportunity would arise. Doodle loved making his grandchildren happy. He made the best pancakes. He built a lean-to in the backyard for them to have an Indian teepee to play in and he was always buying their favorite food, be it shrimp rings or maraschino cherries. He loved pineapple upside-down cake and it was even better when a grandchild had helped bake it! Doodle had a special knack for raising livestock. In the mid-2000’s he started R & G Farm’s, west of Duke where he raised goats, hogs, chickens, and rabbits. He was super proud of a particular goat that he and RyLee owned named Patches. Patches, he was sure, was a world record holder for having 5 kids and raising them all herself. He would often go sit with his animals just enjoying being outside with his livestock. His grandson-in-law, Blake had become a tremendous help, as Doodle became less active. Otto is preceded in death by his parents, Otto and Minnie; five brothers, Loyd Combs, J.B. Combs, Dwight Combs, Jimmy Dale Combs, and Jackie Combs; and two sisters, Edith and Georgia Fay. He is survived by his wife, Melba of their home in Duke; his sons and daughters in law, Kenny and Tammy Combs of Duke, David and Angela Combs of Enid, Steve and Rita Combs of Chickasha, Mitchell Combs of Oklahoma City, Darrel Combs of Altus, and Phillip and Becky Combs of Lake Jackson, Texas; fourteen grandchildren, Timber and Kanon, Molly and Ryan, Josh and Caleb, Kayly and Kord, Mackenzie, Tabitha, Candice and Dillan, Taylor and RyLee; 12 great-grandchildren; and a host of other family and friends. Online tributes may be made at kincannonfuneralhome.com

ATTENTION: Graveside Services will be at 2:30 PM on Tuesday, February 3, 2022 at Rock Cemetery. Otto Combs, Jr., known by everyone as Doodle, was born March 1, 1937 in Duke, Oklahoma to Otto Combs, Sr., and Minnie Ola (Houtchen) Combs. He... View Obituary & Service Information

The family of Otto Combs created this Life Tributes page to make it easy to share your memories.

ATTENTION: Graveside Services will be at 2:30 PM on Tuesday,...

Send flowers to the Combs family.