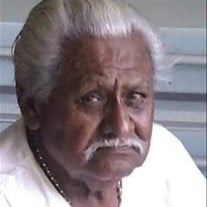 Pantalion "Panta" Valdez Torrez, 83, Altus, went to be with the Lord on Monday, December 24, 2018. Funeral services will be 2:00 PM Saturday, December 29, 2018 in the Kincannon Memorial Chapel. Burial will follow in the Martha Cemetery under the direction of the Kincannon Funeral Home and Cremation Service. Pantalion Valdez Torrez was born in Choate, Karnes County, Texas on February 26, 1935 to Estaban Estraca Torrez and Elisa Tobar Valdez. He was baptized on April 13, 1935 in Runge, Texas and was of the Catholic faith. He married Francisca "Tina" Torres on January 8, 1955 in Karnes City, Texas and to this union, nine children were born. Panta lived in Jackson County for more than 40 years. He worked as a plumber and then drove 18 wheelers for several years. He later managed his own business, Torrez Body Shop, in Altus. His love of restoring vintage cars and taking them to car shows was his passion. He won many trophies for his car restorations. He drove a racecar at Quartz Mountain Speedway at one time and later enjoyed going to the races and watching his son, grandson, granddaughter and nephew's race cars. He also enjoyed playing guitar but most of all he enjoyed spending time with his large family. Panta is preceded in death by his parents, a brother, Joe Torres; a sister, Tomesia Alvarado, and infant siblings, daughter, Consuela, and son, Steve, and a grandson. He is survived by his wife, Francisca, of the home; children, Dubie Torrez and wife, Diane, Gloria Castro and husband, Layo, Virginia Torrez and fiancé, Terry, Mary Dolan and husband, Chris, Dora Moriarity and husband, Patrick, Elisa Thomas and husband, Delwyn, and Beatrice Torrez; 20 grandchildren; 31 great grandchildren; one great great grandchild; sister, Pena Bueno; brother, Steve Torrez; and many nieces and nephews. The family will receive friends from 5:00 - 8:00 PM Friday, December 28, 2018 at the funeral home. Family and friends unable to attend may log on to kincannonfuneralhome.com, 30 minutes prior to the service, to view the live webcast of the funeral. Online tributes may be made at kincannonfuneralhome.com

Pantalion "Panta" Valdez Torrez, 83, Altus, went to be with the Lord on Monday, December 24, 2018. Funeral services will be 2:00 PM Saturday, December 29, 2018 in the Kincannon Memorial Chapel. Burial will follow in the Martha Cemetery under... View Obituary & Service Information

The family of Pantalion "Panta" Valdez Torrez created this Life Tributes page to make it easy to share your memories.

Pantalion &quot;Panta&quot; Valdez Torrez, 83, Altus, went to be with the...

Send flowers to the Torrez family.