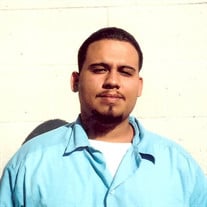 Peter Gloria, 41, Carter, Oklahoma passed away Saturday, February 8, 2020 in Holdenville, Oklahoma. Funeral services have been scheduled for 2:00 PM, Friday, February 14, 2020 at the Kincannon Memorial Chapel with Dio Gloria officiating. Burial will follow services in the Restlawn Cemetery under the direction of Kincannon Funeral Home and Cremation Service. Peter Gene Gloria was born November 27, 1978 to Edward M. and Sandra (Grubbs) Gloria in Lubbock, Texas. He graduated from Carter High School with the Class of 1997. After graduation he earned a two year degree at Burns Flat Vo Tech and had also earned degrees at Legacy Bible College. Peter was a meat butcher by trade and enjoyed fishing, camping, hunting and being outdoors. He was an artist who loved to create drawings for all his family, whom were his greatest treasure. Peter is preceded in death by his father, Edward Gloria. He is survived by his mother, Sandra Ramirez and husband, Robert; siblings, Rudy Gloria and wife Lisa, Olivia Martinez and husband Jovani, Carl Gloria and wife Leah, Samuel Gloria and wife, Caitlin, Edward Gloria Jr. and wife Rosa, Jessie Gloria and wife Beatrice, Sandra Estraca, Susie Gloria, Dominga Gloria and Abby Gloria. He also leaves a host of nieces, nephews and friends. The Gloria family will greet friends Thursday evening from 6 to 8 p.m. at the funeral home. Online tributes may be made at kincannonfuneralhome.com

The family of Peter Gloria created this Life Tributes page to make it easy to share your memories.

Send flowers to the Gloria family.