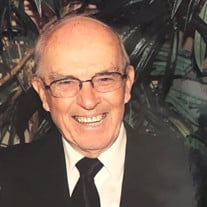 Ralph Arvin Van Fossan, age 92, passed away at his daughter’s home in Martha, Oklahoma on June 10, 2021. No services are scheduled at this time. Arrangements are under the care of the Kincannon Funeral Home and Cremation Service. Ralph was born in Columbiana, Ohio on April 16, 1929, to George and Jessie Mae (Flower) Van Fossan. He married his bride Marjorie Holloway in 1953 on May 30th and they enjoyed 58 years of marriage. To this union five children were born, Mark, Kurt, David, Martha and James. Ralph joined the Army in 1951 and served in the 1st Calvary, 5th Regiment,2nd Battalion, “H” Company in the Korean War. Ralph was of the Lutheran faith and was always giving a helping hand to everyone he met. By the grace of God, Ralph served God, his family, his country, and others well. He was generous with his kindness and always expressed such unfailing love and encouragement toward so many children, grandchildren and great grandchildren. He loved sharing his life adventures with such humor and wit. Family and friends loved listening to his many stories. He lived a full and love-filled life. He will be missed by many. Ralph was preceded in death by his loving wife, Marjorie; his parents, George and Jessie Mae; sister, June; and brother, George (Dusty). He is survived by his children, Mark, Kurt and wife, Andrea, David and wife, Lynn, Martha and husband, John, and James and wife, LeighAnn; twelve grandchildren, Jessica Welter and husband, Ben, Greg Van Fossan and wife, Laura, Seth Van Fossan and wife, Chelsea, Dustin Brown and wife, Ashley, Cheryl Pratt and husband, Adam, Lisa Tranel, Lauren Tesmer and husband, Ben, Sophia Van Fossan, Sawyer Van Fossan, Joseph Barrett and wife Peyton, Hunter Barrett and wife, Shelby, and Charlcey Barrett; twenty-two great-grandchildren, Jacqueline, Calvin, Jordan, Breckin, Ella, Kaitlyn, Jamison, Charlie, Jemima, Jonathan, Liana, Luke, Ava, Rylee, Brent, Ryan, Jonathon, Joel, Colton, Addison, Cutter and Dalli; brothers, Gerald and wife, Nancy and Melvin and wife, Marilyn; and sister, Verna Stoffer and husband, Donny. And many nieces and nephews. In lieu of flowers the family requests that donations be made to Jackson County Memorial Hospital Hospice, 1204 E. Tamarack Road, Altus, OK 73521 in memory of Ralph. Online tributes may be made at kincannonfuneralhome.com

Ralph Arvin Van Fossan, age 92, passed away at his daughter&#8217;s home in Martha, Oklahoma on June 10, 2021. No services are scheduled at this time. Arrangements are under the care of the Kincannon Funeral Home and Cremation Service. Ralph... View Obituary & Service Information

The family of Ralph Arvin Van Fossan created this Life Tributes page to make it easy to share your memories.

Ralph Arvin Van Fossan, age 92, passed away at his daughter’s...